Should I crop my image? 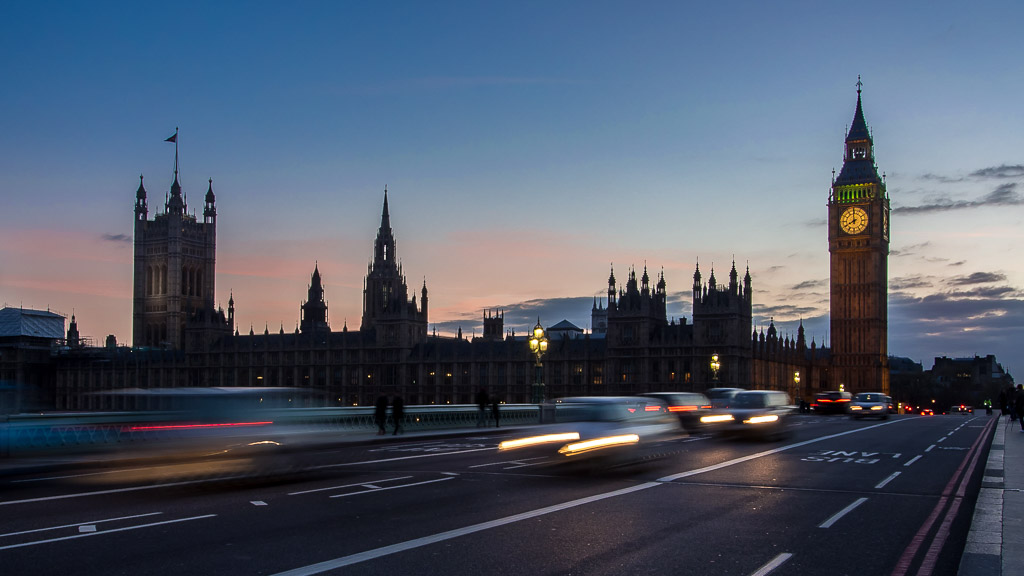 There are generally two kinds of photographers – those that develop their images in software and those that “get it right in camera” and don’t do any post processing other than basic tonal adjustments. I’m in the middle, in a third group… those that get it mostly right in camera but are still happy to post-process their images. One of the questions that arise as part of that post-processing is “should I crop my image?”

The first thing to think about when considering whether or not to crop your image is what aspect ratio you would like to present your image in. Should it be square? What about panoramic? There are many “standard” aspect ratios and an infinite number of custom ratios. Which one should you choose?

The next consideration is whether or not to present a portrait or landscape orientation. Most images will be one or the other, but of course a square aspect ratio is neither.

What aspect ratio are my camera’s images

Most dSLR cameras produce images that are a 3:2 aspect ratio. That is, they are three measurement units along their long edge and two measurement units along their short edge. The actual pixel measurements will vary depending on the number of megapixels for the image, but if you take the pixel count of the long edge and divide it by the pixel count of the short edge, the answer will be 1.5. In other words, the long edge is 1.5 times longer than the short edge.

Four-Thirds and Micro Four-Thirds cameras, together with most “point and shoot” compact cameras use an aspect ratio of 4:3. That is, the long edge is 1.33 times longer than the short edge. This happens to be the same aspect ratio of older analogue televisions.

Some specialist cameras have different aspect ratios – such as 6:17 panoramic cameras where the long edge is 2.83 times longer than the short edge. Most people don’t use those cameras though. The most common aspect ratios captured by modern cameras are 3:2 and 4:3. Many cameras can be set to capture other common aspect ratios such as 1:1 and 16:9.

Some cameras also have a dedicated “panoramic mode” where the camera is panned from left to right while the image is being captured. The image above of Port en Bessin in Normandy was made using the Panorama Mode of a Fujifilm X100S. The camera produced a JPEG image that was simply converted to black and white with some basic tonal adjustments.

Gold Beach in Normandy, France was one of the beaches the allies landed on during the “D-Day landings” in World War II. It is one of a number of beaches that stretch along the coast and played a pivotal role in the allied invasion of Europe.

When I visited Gold Beach I was struck by the sheer size of the beach. My head was filled with images of thousands of men being landed on the beach and going head-on into battle. The enormity of the operation was brought home to me in a very real way.

I captured many images, but this one showing local fisherman launching their boats is one of my favourites. Some of the concrete pontoons that remain from that fateful June day in 1944 are still a prominent part of the seascape. After converting the image to black and white, I felt that a panoramic image was the best way to portray the size of the beach, the fishermen and the pontoons. I cropped the image to an aspect ratio of 2.39:1, which is the same ratio as many movies filmed with Panavision cameras and lenses. 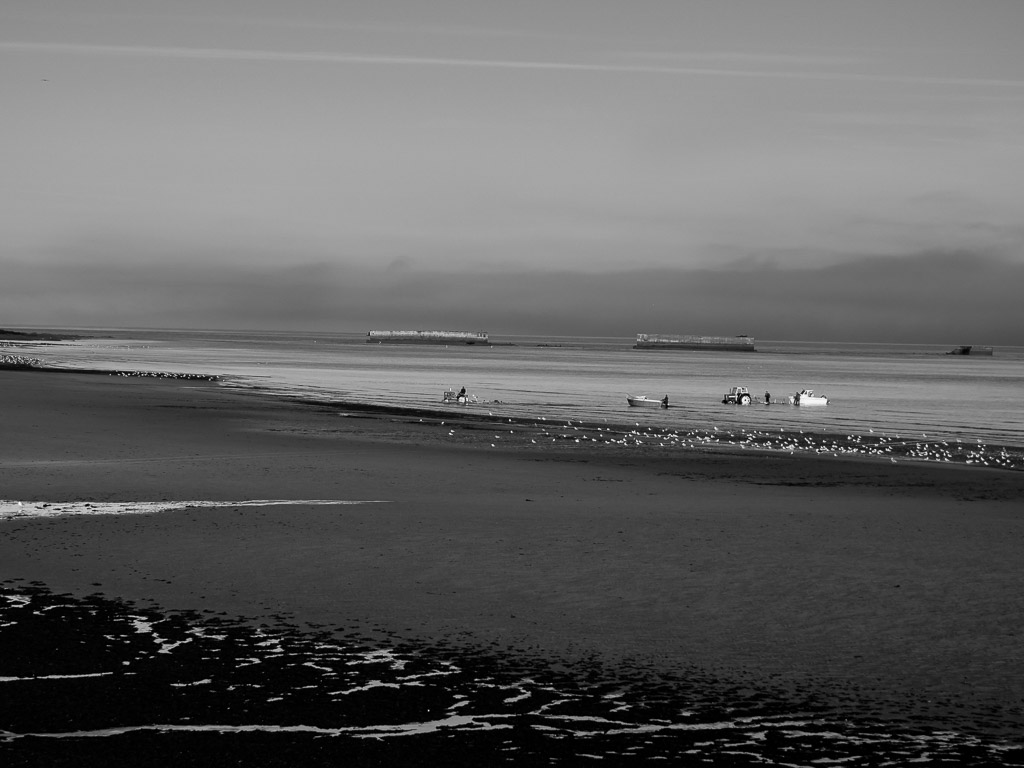 The original aspect ratio of this image was 4:3. 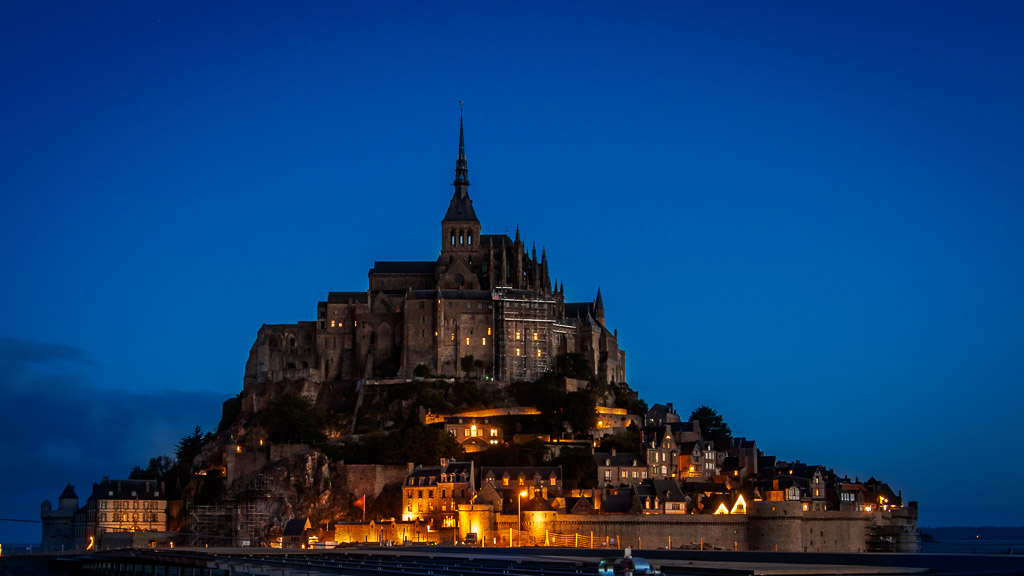 Mont Saint Michel has a history going back to the 5th century, although the first parts of the monastery weren’t built until the 8th century. The Mont is a fascinating place during both daylight and nighttime hours.

When I visited, access to the island was via a causeway with a new bridge being constructed nearby. This image was made during ‘blue hour’ just before sunrise. In order to capture the whole of Mont Saint Michel, I needed to be so far back along the causeway that part of the new bridge construction was visible in the image. I made a decision to crop the image to a 16:9 aspect ratio to achieve two things. First, the aspect ratio is the same as modern widescreen televisions, so the cropped image would already be the correct aspect ratio for a slideshow. Second, cropping the image in this manner allowed me to remove the bridge construction from the foreground. 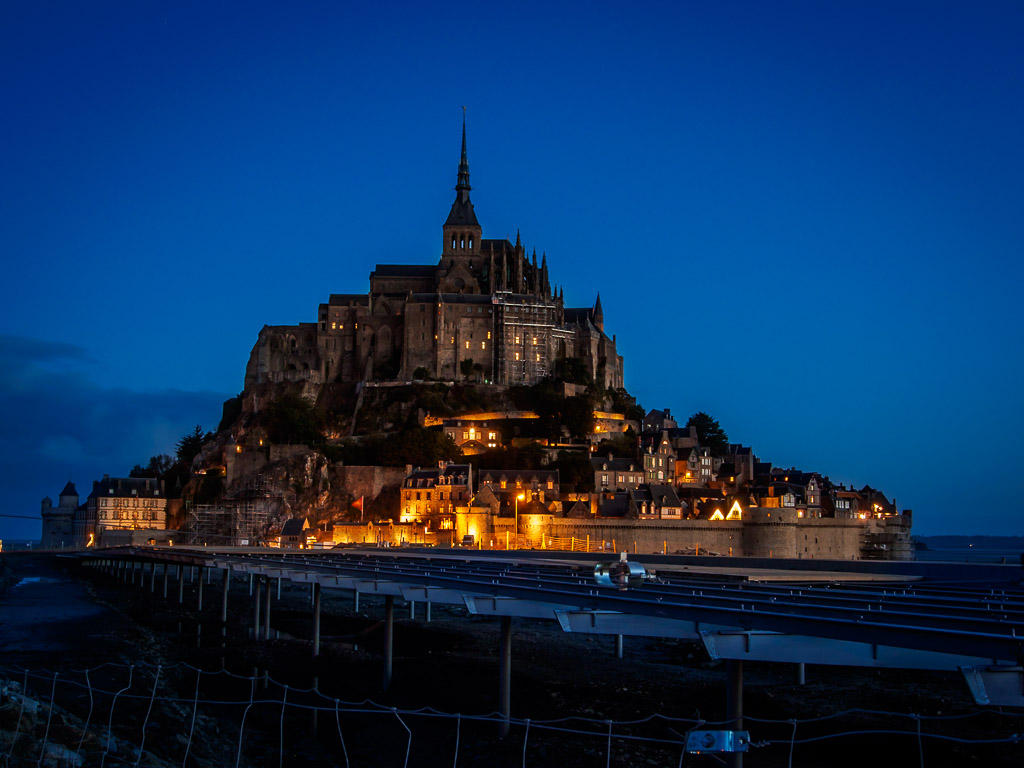 The original image had a 4:3 aspect ratio. 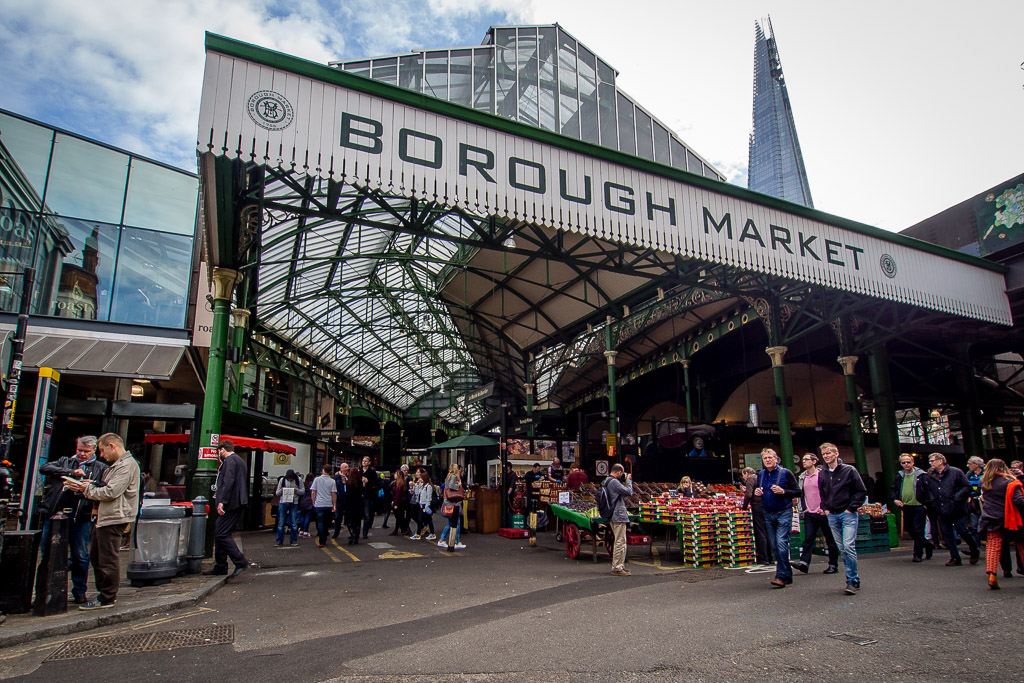 Borough Market is one of the oldest and most visited markets in London. It dates back to the 11th century when traders sold grain, fish, vegetables and livestock.

This image shows the market from Stoney Street with the recently completed building ‘The Shard’ in the background. I chose a simple 3:2 aspect ratio for this image because I wanted to show the name of the market, the hustle and bustle of the people in the market and the modern building in the background. The image was made with a micro four-thirds camera, which meant the original aspect ratio was 4:3, leaving too much empty space in the foreground. Cropping to 3:2 took care of that problem while still leaving enough space for the pedestrians to ‘move into’. 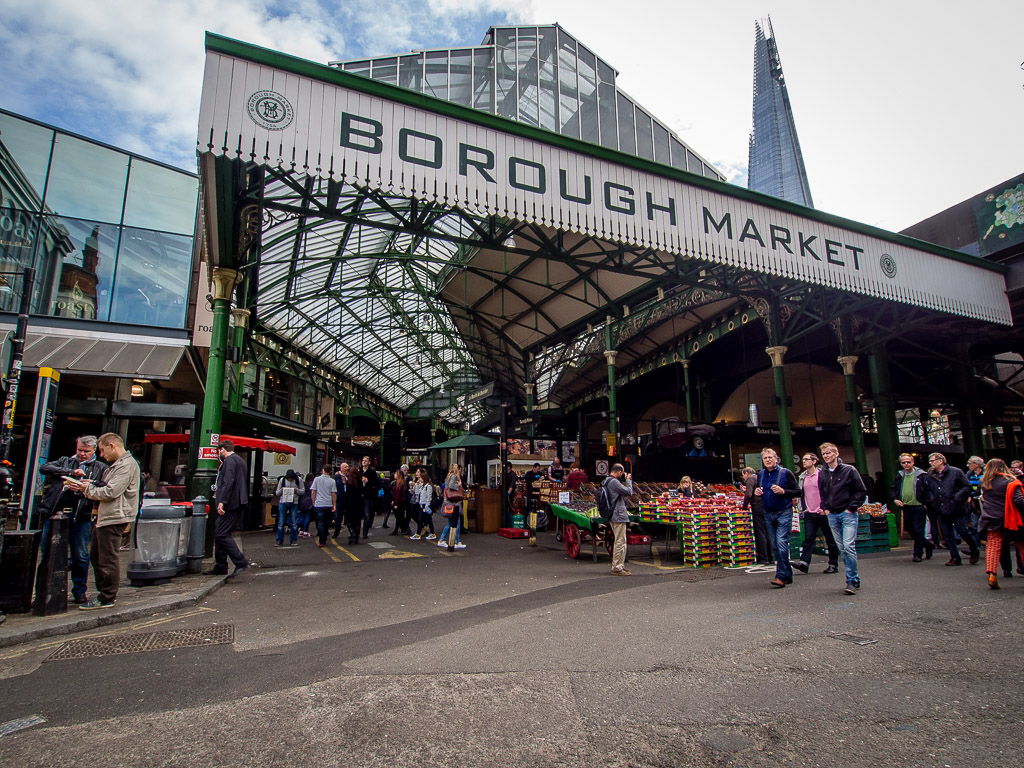 The current St Paul’s Cathedral was designed and built by Sir Christopher Wren in the 17th century to replace the previous incarnation that was destroyed during the Great Fire of London in 1666. The church sits at the top of Ludgate Hill and is the highest point in the City of London. It can be seen from many vantage points around the city, but one of my favourite views is from Millenium Bridge which crosses the River Thames near the cathedral. 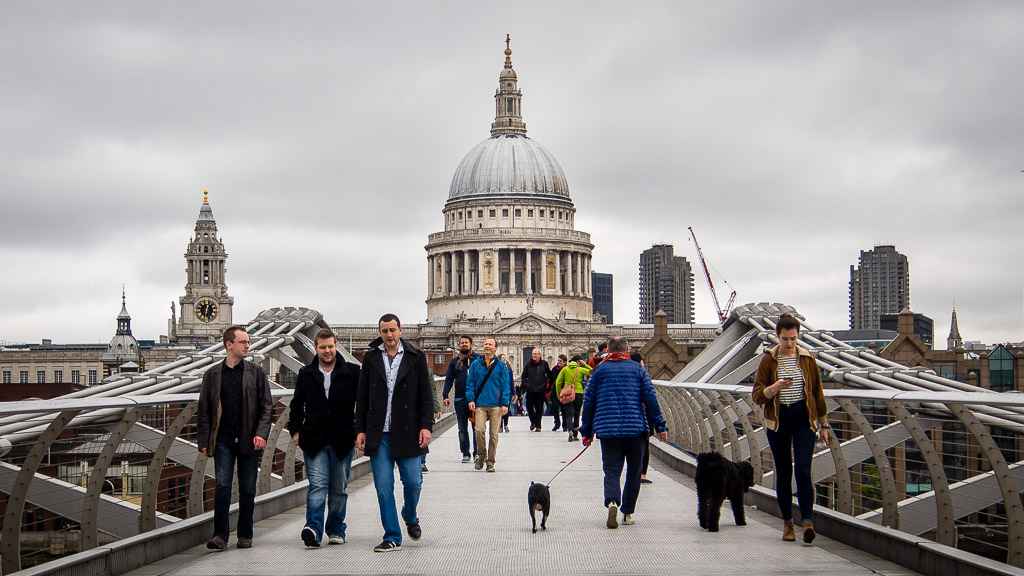 This image was made from the south bank of the Thames in front of the Tate Modern art gallery. Looking back towards St Paul’s across the bridge you’re able to see the cathedral in it’s modern surrounds. Waiting for a shot without any people is almost impossible unless you’re making your photograph very late at night or very early in the morning. I was there in the middle of the day.

I chose to crop this image to a 16:9 aspect ratio to eliminate the somewhat empty and boring foreground and to accentuate the people walking across the bridge. Rather than trying to make the people disappear, I chose to embrace their presence and make them a prominent part of the image. By cutting out the foreground you’re able to bring the pedestrians “closer” so they impose themselves on you. They become a deliberate part of the scene, rather than incidental subjects that look like they don’t really belong. 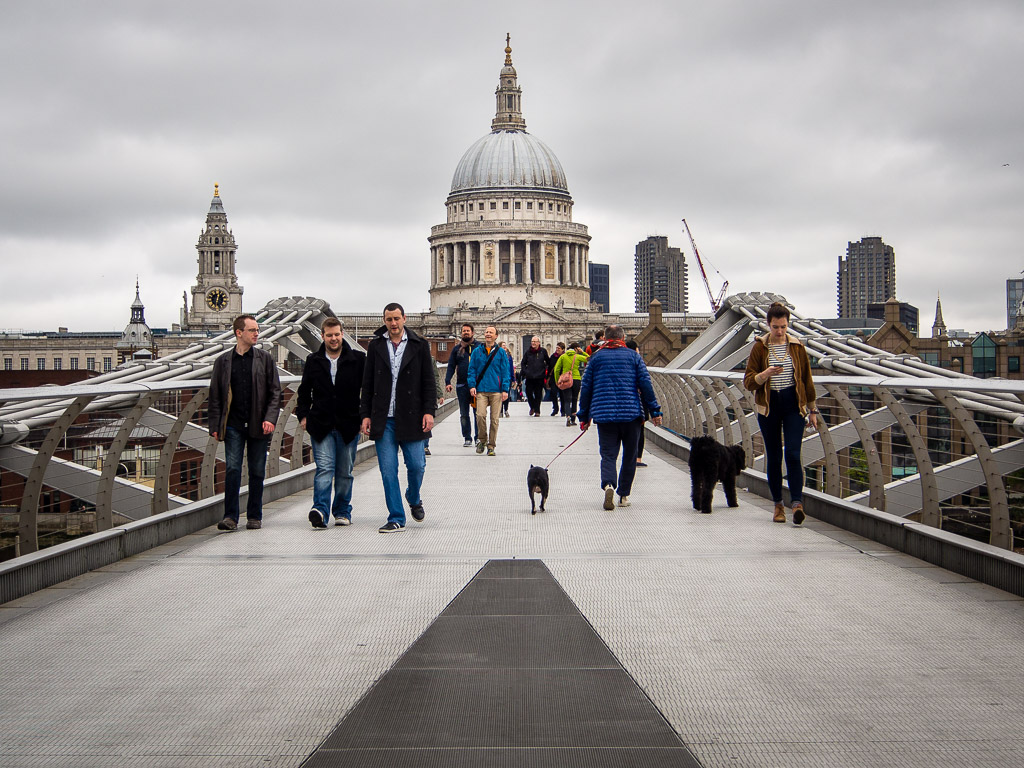 The original aspect ratio of this image was 4:3.

This image of a carousel was made on the South Bank of the River Thames. It was a bright colourful scene, but I thought there were too many colours all fighting with each other for visual dominance. I converted the image to black and white, which made the tones more balanced. 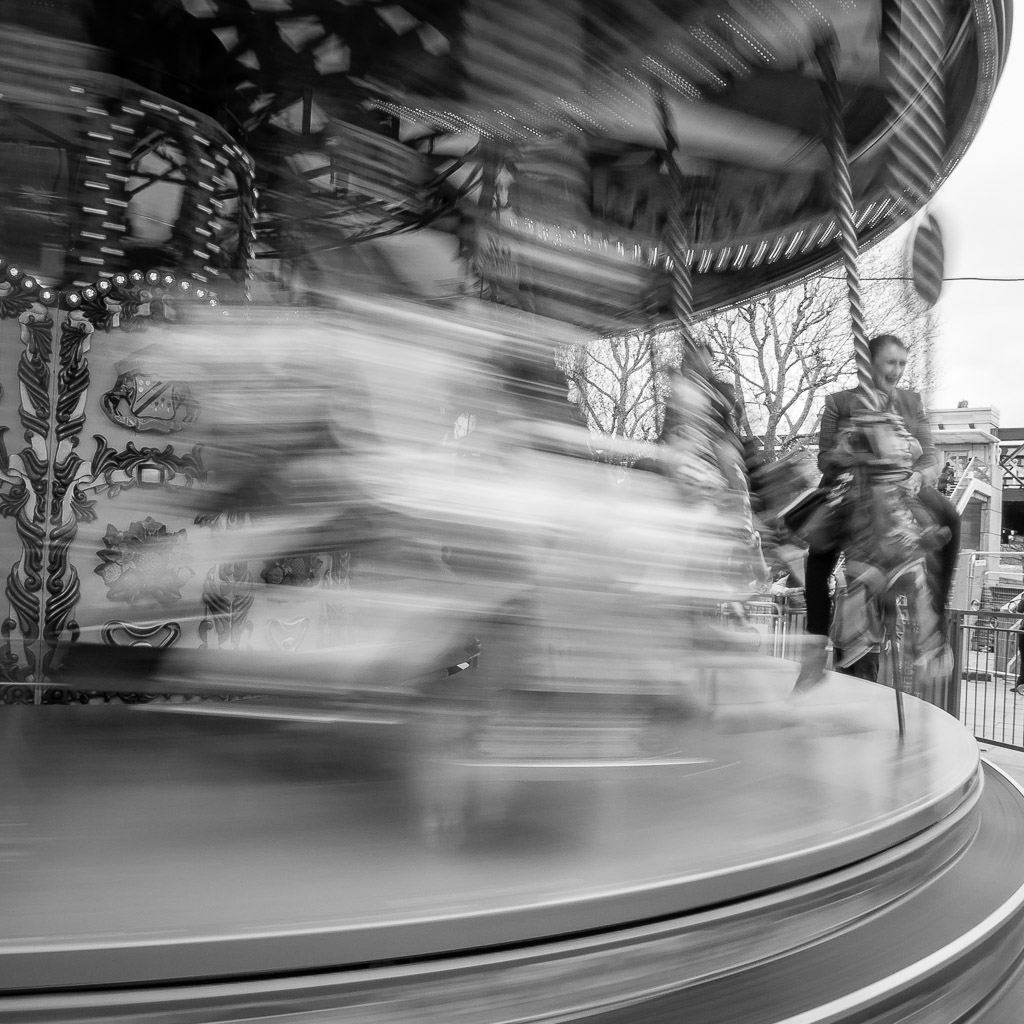 The image was made with a micro four-thirds camera, so the original aspect ratio was 4:3. When viewing the image at it’s original aspect ratio your attention is drawn to the horse in the centre of the photograph. The horse isn’t really the focal point of this photo though. The grown man riding the carousel and displaying a broad grin is really what this image is all about. By cropping to a square, or 1:1 ratio, the left side of the image is removed and the man becomes visually bigger within the frame. That makes him large enough that your eyes are drawn to him and his laughter. Your eyes are drawn automatically to people in an image, but if those people are too insignificant then other elements of the photograph can dominate and cause us to look elsewhere within the image. 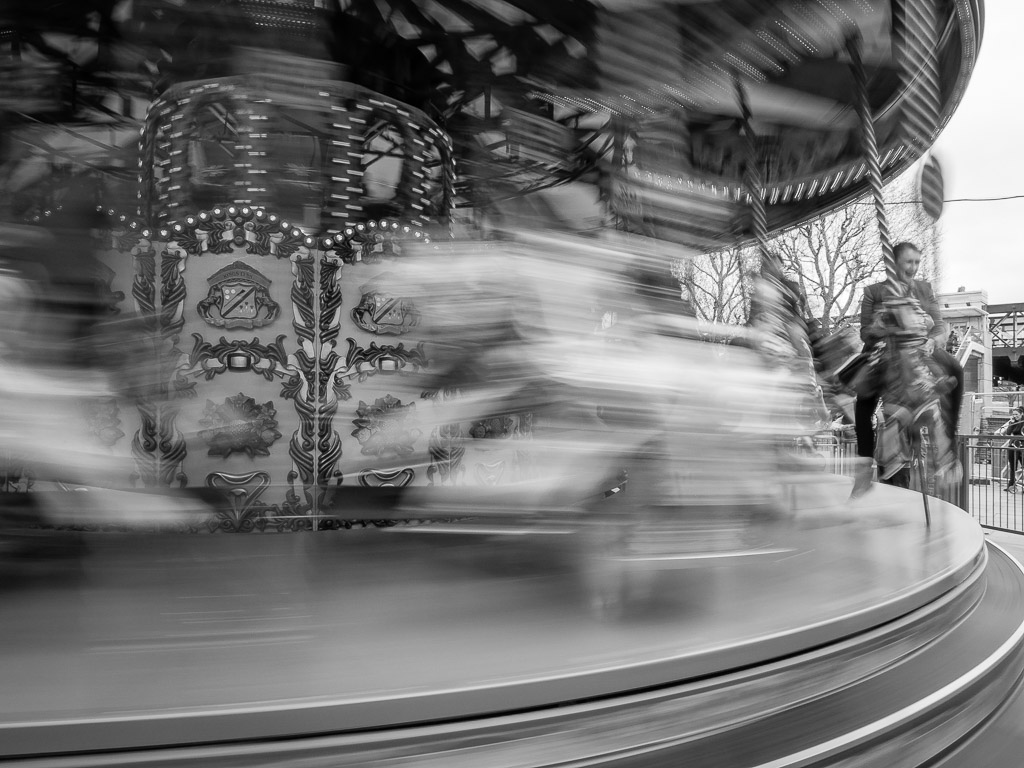 Images are simply artistic interpretations of a scene. The best way to present that image is your decision as the artist. Sometimes an image will cry out for a particular crop, sometimes it won’t. Look at the image. Examine it and decide how you want to present it, then crop it to match your vision and intent. Don’t be afraid to crop to an aspect ratio that is not a ‘standard’. Make an arbitrary crop if the image calls for it – just don’t always settle for what comes out of the camera.