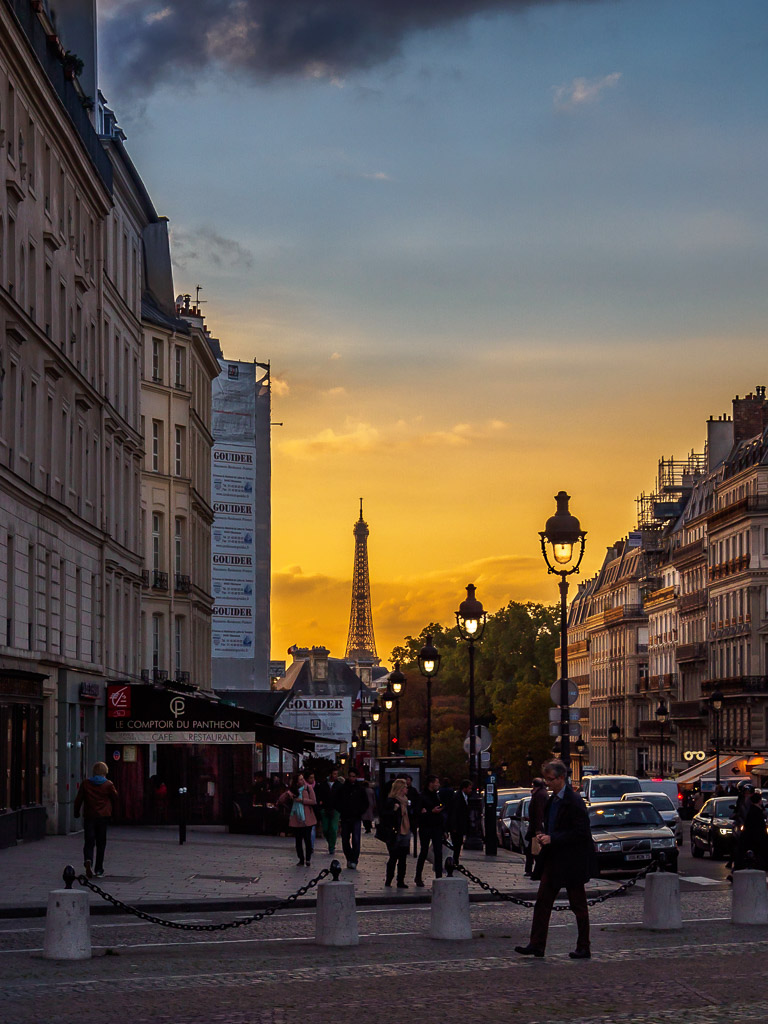 Looking along Place du Pantheon towards the Eiffel Tower in Paris, France.

Sometimes your eyes see things differently to how your camera sees the same scene. Sometimes you see something similar, but have a different idea of how you want to present the image. Sometimes the final image is nothing like what was actually in front of you. It doesn’t really matter in one sense because photography is a form of art. The final interpretation of the image can be anything you want it to be.

You are the artist.

Take the image at the top of this post for example. The original image really doesn’t look anything like the final product. The final image is more like what was there on the night, but the dynamic range of the camera just wasn’t able to capture the full range of light. The sun was setting and the light was fading, but the sky was still a lot brighter than the rest of the scene.

Straight out of camera 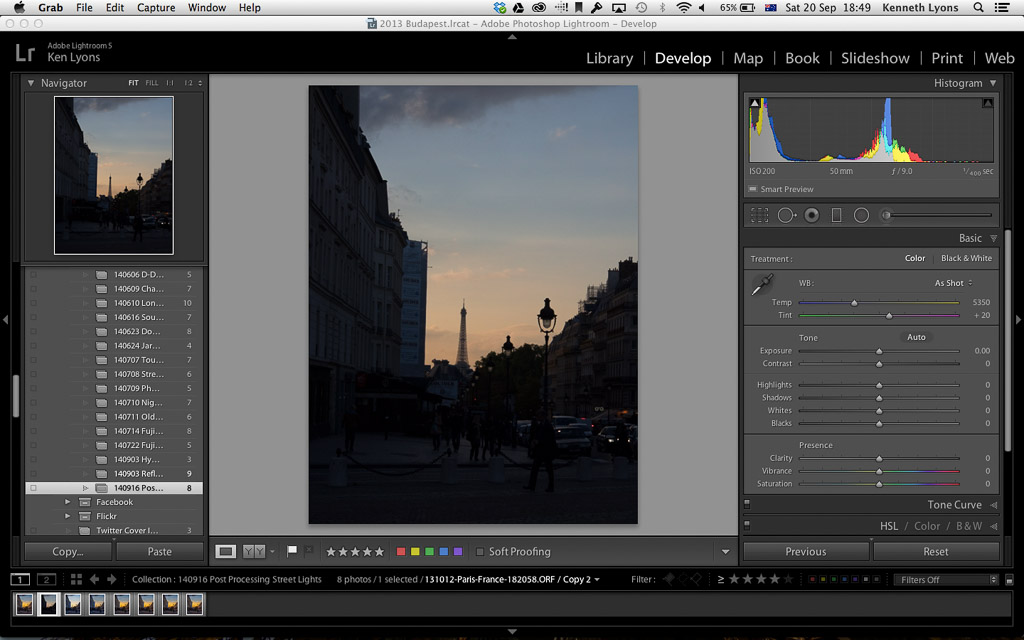 Before getting down to the finer details of developing the image, there were some global adjustments made to improve the overall exposure. The image was also straightened.

Although not shown in the image, there were some global changes to sharpening too. 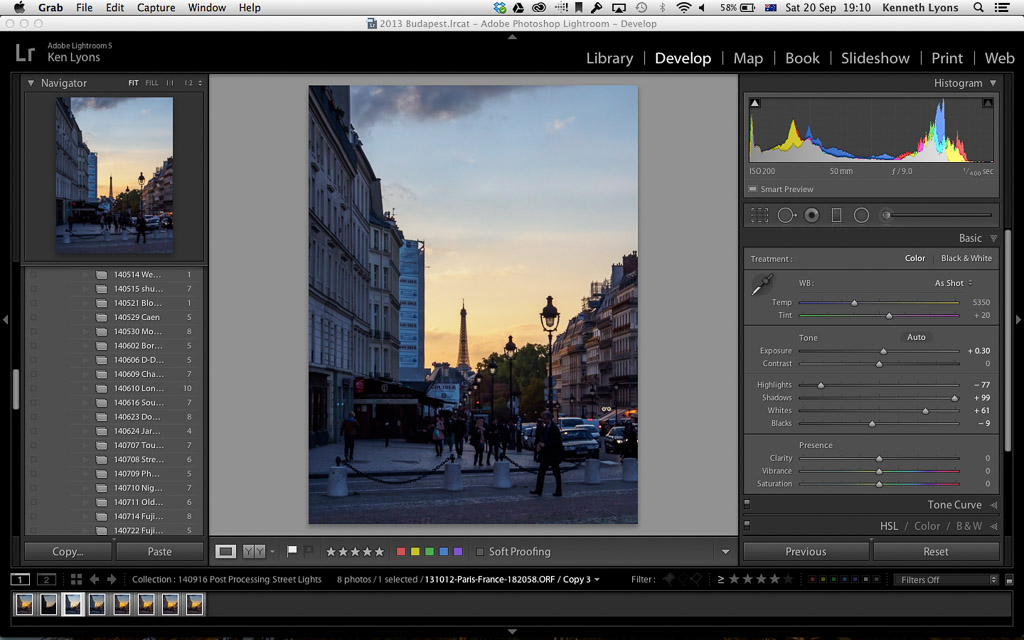 Next there were some changes made using the Adjustment Brush.

First up was the sky. The screenshot below shows the mask applied in Lightroom that indicates where the brush was painted and where the adjustments were applied.

The brush was adjusted to a suitable size and the feather amount set to 100. Both Flow and Density were set to 80. 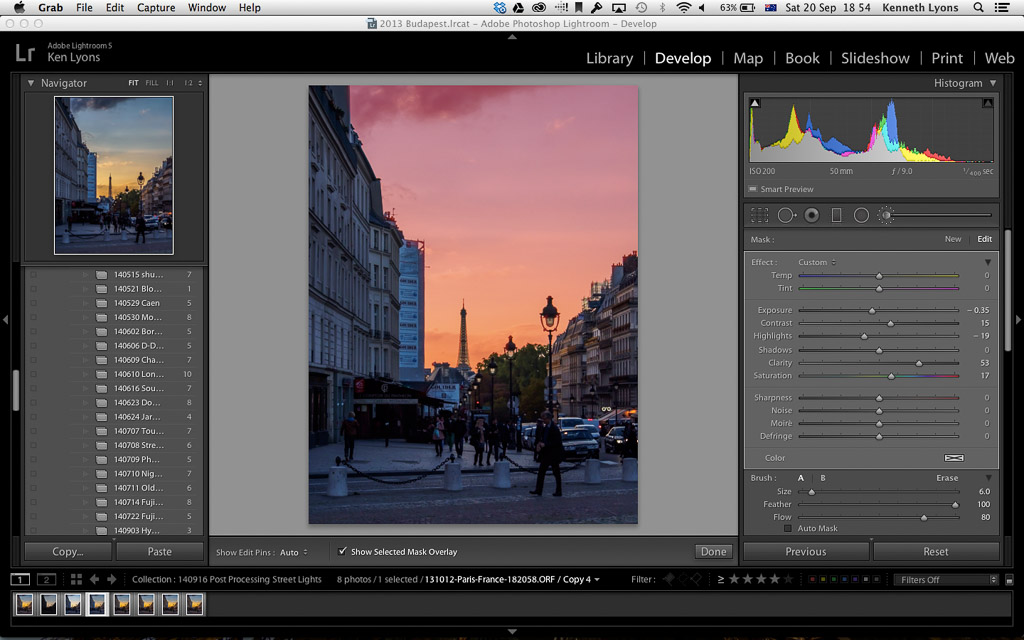 Next, the lower half of the image was warmed up. The foreground was in shadow and looked quite blue in the original photograph. Using the adjustment brush the Temperature was increased by 31 and then painted over the image. The screenshot shows the mask, which also includes the lower part of the sky. Painting over the warm tones already visible in the sky made them contrast even more with the cool of the blue sky above.

Both the Flow and Density were again set to a value of 80, with a Feather amount of 100. 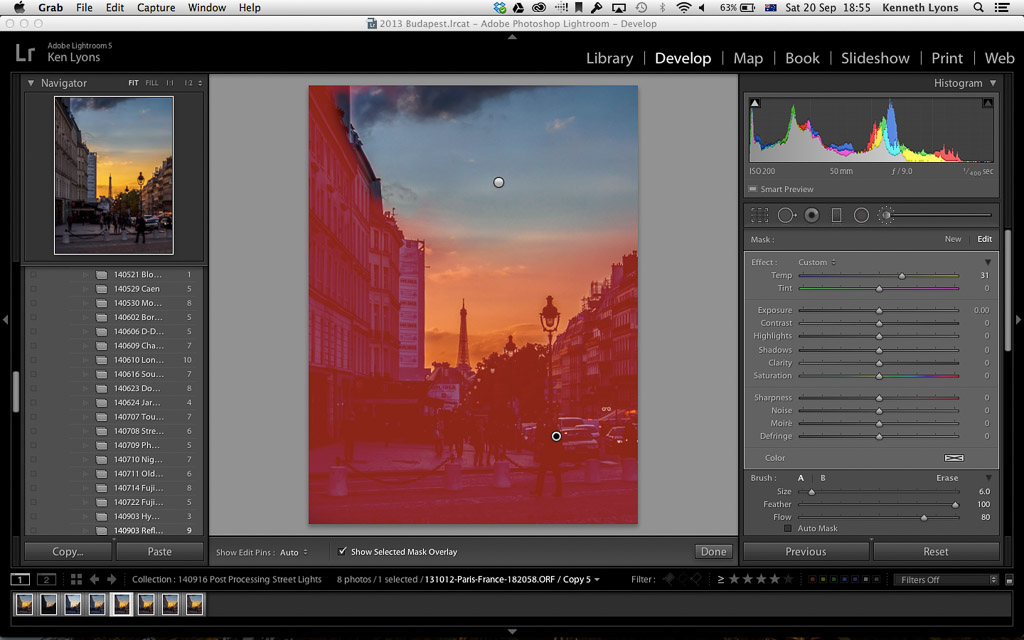 Next up was the pedestrian walking through the frame in front of the bollards and a street canopy on the footpath on the left of the image. Both were a little dark, so the following adjustments were added – 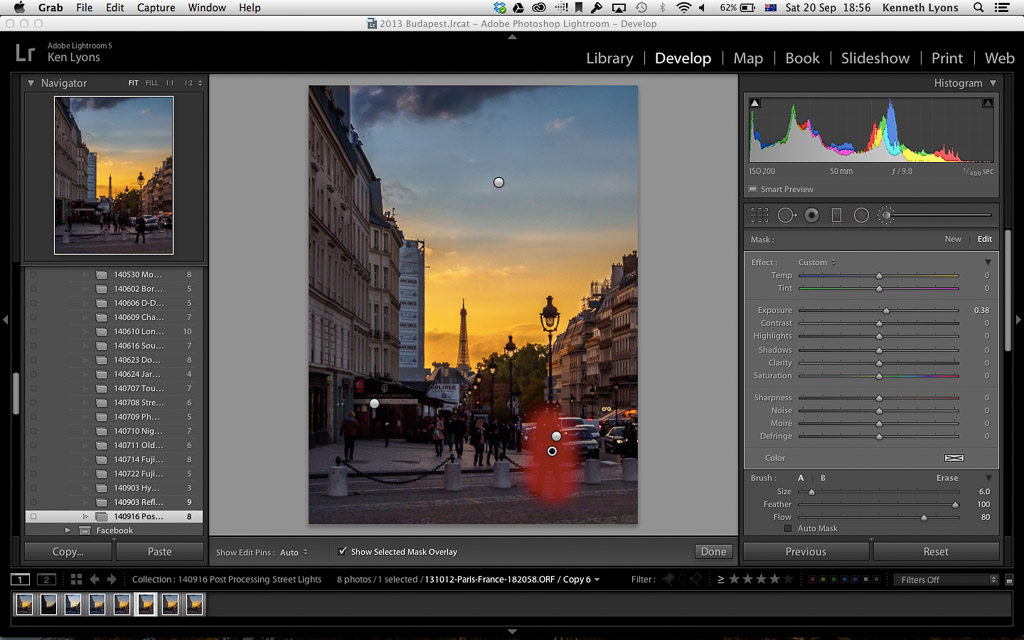 The buildings in the original image looked quite flat so two radial filters were added. First on the buildings on the right and then on the left side of the road. 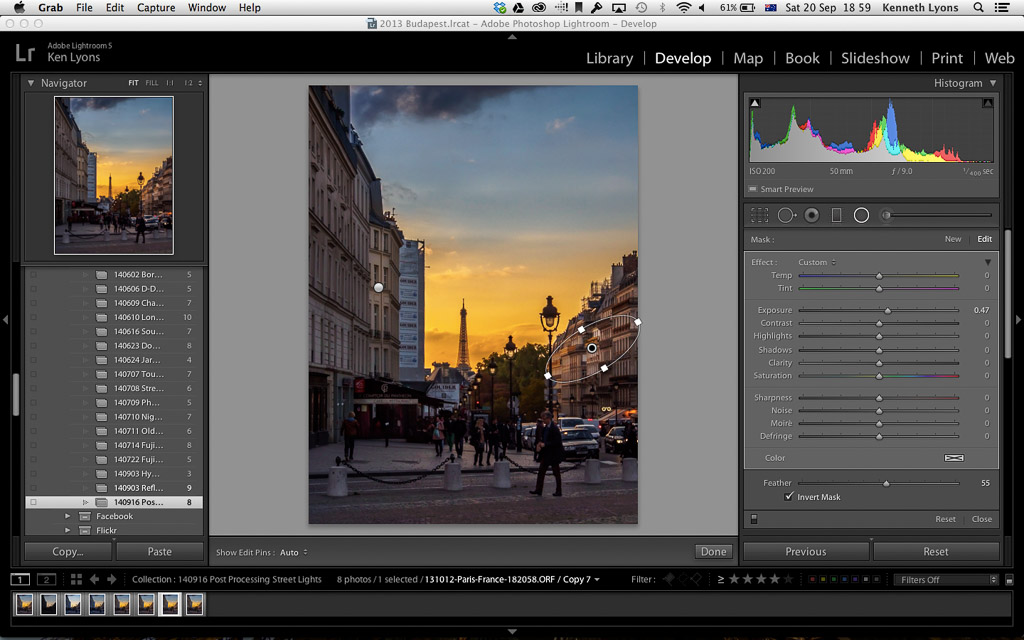 Turning on the lights

The final change to the image was to turn on the streetlights using the Adjustment Brush. The lights were lit simply by painting over each of them with the following adjustments – 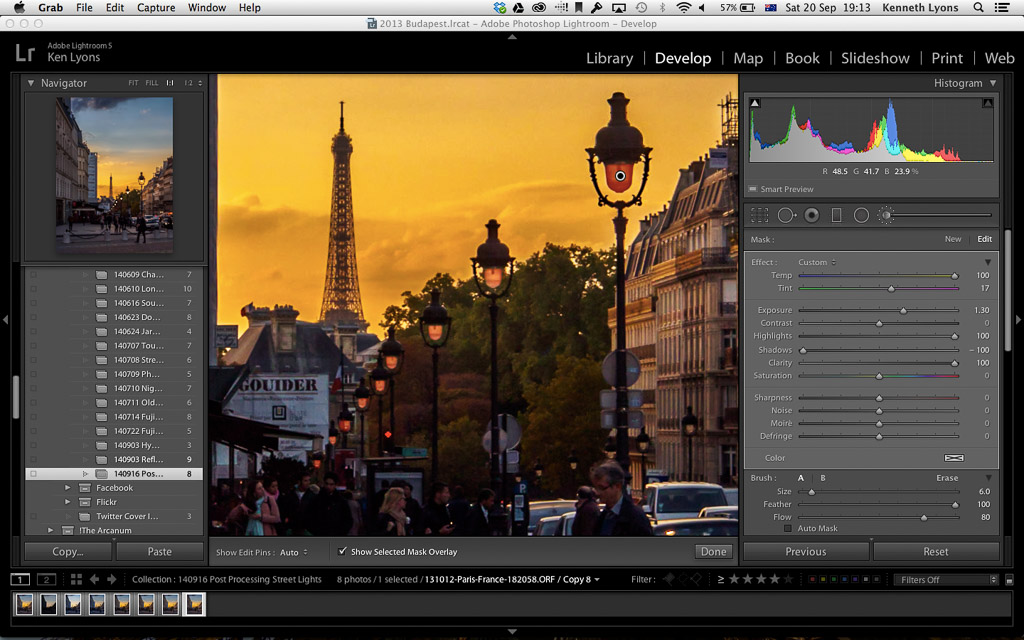 Turning on the streetlights using the Lightroom Adjustment Brush

And there you have it. Some simple adjustments to the image that drastically changed the way it looks. From a dark and flat image on the left to a much brighter and more vibrant image on the right of the screenshot below. 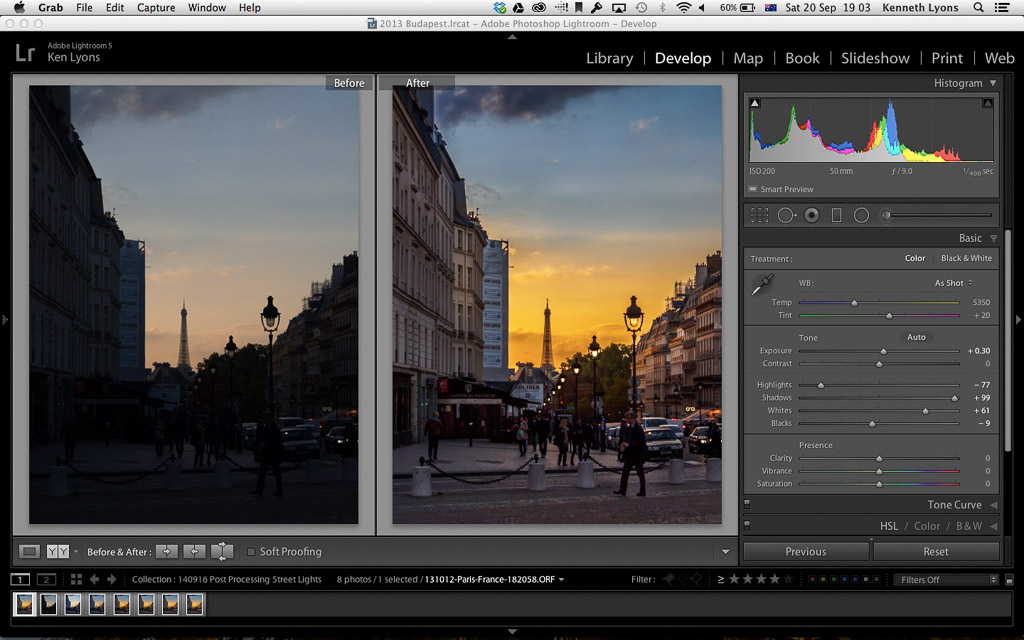 Remember that photography is a form of art. There is no right or wrong way to process a photograph. The only thing that matters is the image you want to present to the world. Try to pre-visualise your image and then make the photograph with that vision in mind. Sometimes the image you capture will be very close to your final vision. Sometimes it won’t.

Don’t be afraid to process your photographs. Learn the limitations of both your camera and your processing software and then go and make images.