The Streets of Rome

Ah… Roma! The Eternal City. What can I say, except that it’s true. It really is the eternal city; in the sense that as you walk around you see things that have been there for an eternity. The founders of ancient Rome believed the city would continue to thrive, no matter how many empires came and went and I think they were right! Rome is still one of the most vibrant and visited cities in Europe. The Roman Forum, Colosseum, Pantheon and Vatican City were all within an easy walk from where I stayed near Campo de’ Fiori. It was my first visit to Rome and I was glad to be there. It’s a wonderful city that I thoroughly enjoyed exploring with a group of friends, both old and new. I look forward to the day I can return to explore some more. 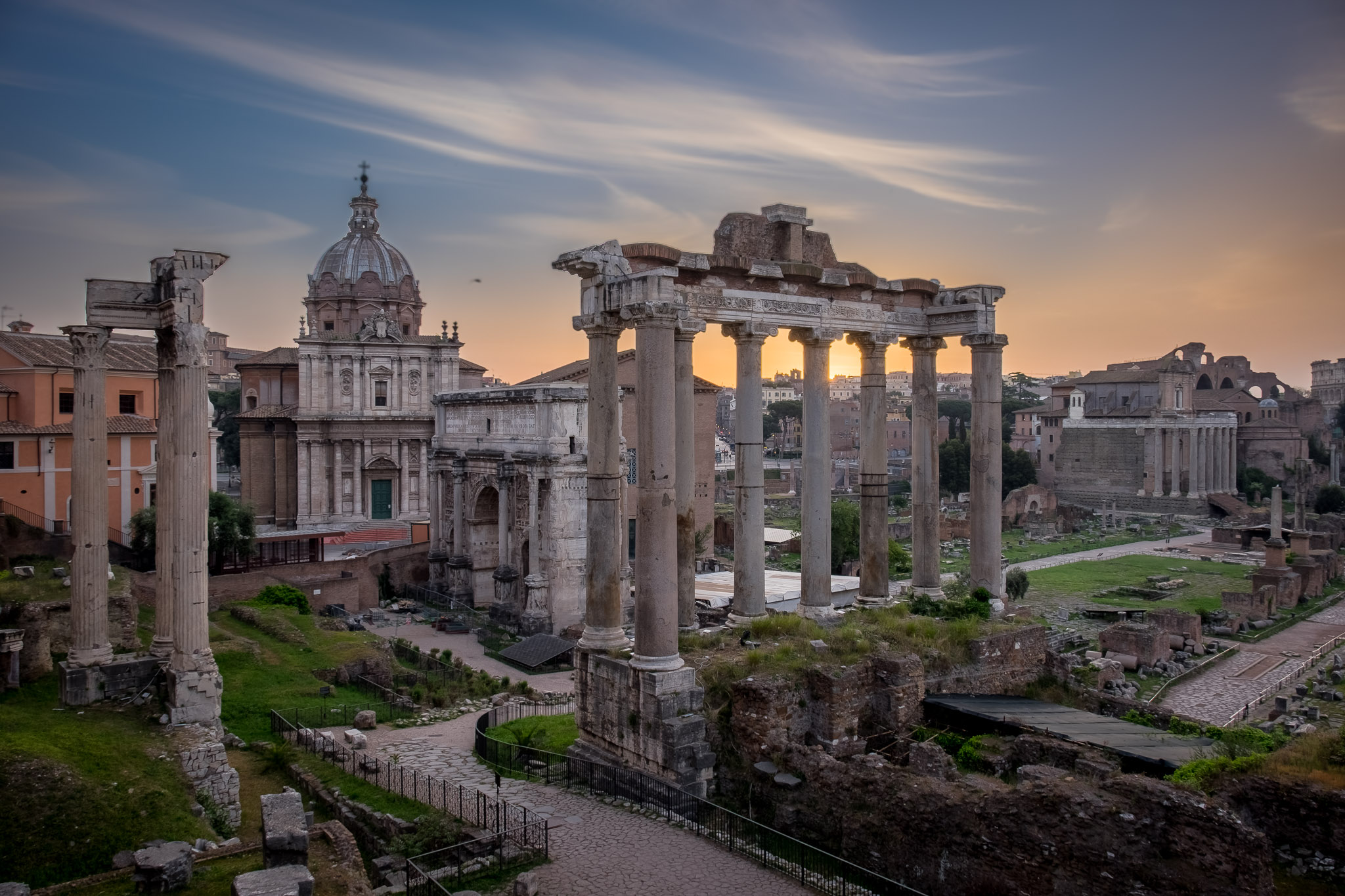 The Roman Forum in Rome, Italy

I arrived in Rome late on a Friday night and was glad to crawl into bed after two long flights and a 10 hour stopover in Dubai. The first flight from Adelaide was about 13 hours and while the flight itself was fine I had a “recliner” in front of me. Almost as soon as we took off, his seat came back and that’s pretty much where it stayed, except for meal times. I had planned to do some work during the flight, but there simply wasn’t enough room. By the time I got off the plane in Dubai, I was ready for a stretch and a good walk around. Luckily, I had a ten hour layover!

I wandered around the Dubai airport for a little while, before heading out to explore. As luck would have it, I was there on a Friday… the only day of the week that most things are shut. Better planning required next time! I headed down to the Gold Souk in a taxi and then wandered around for a little while. Every second step I took I got offered a cheap ‘Rolex’ watch, but I wasn’t in the market for one, so I had to keep declining. I made my way through the Souk and down to the waterfront of the old harbour, which was home to many of the Dhows that ply trade between Dubai and Iran. The docks were loaded with all sorts of goods, ranging from air-conditioners to fridges and other electrical items, as well as food and home supplies. There’s no machinery here for loading; everything is done by hand. There were many weathered men preparing for the arduous task of loading the goods onto the boats for the trip across the water. 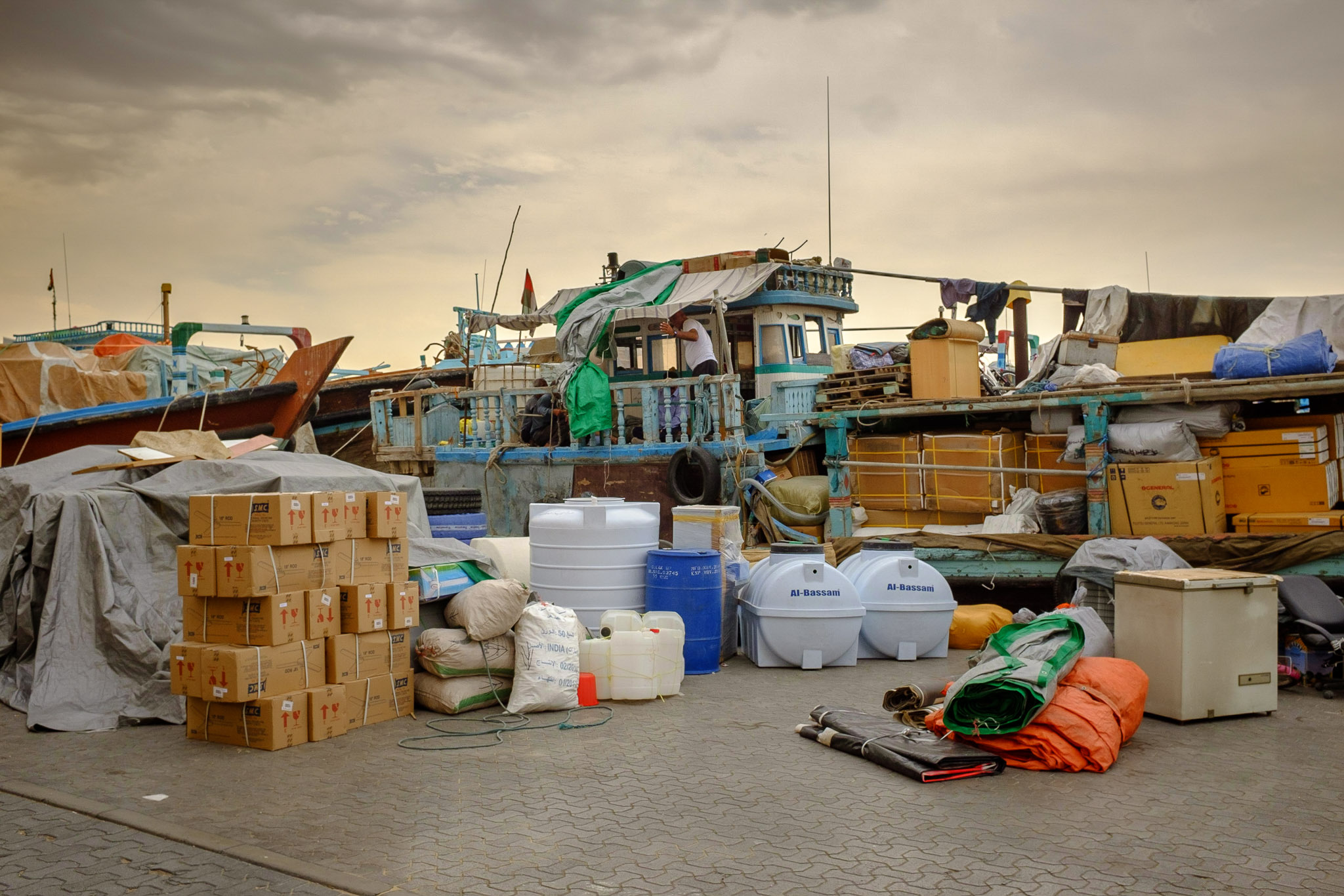 A Dhow ready to be loaded with its cargo in Dubai

Next stop was the Creekside Café on the waterfront. I needed to take a ride on an Abra across Dubai Creek in order to meet up with food blogger Rachel Page. Rachel runs the successful ‘Marmalade and Me’ website and Facebook Page. We’d met online and finally got to meet in person during my stopover. It was a pleasure to meet Rachel and her husband Steve. We met at the café and enjoyed a wonderful brunch and coffee. 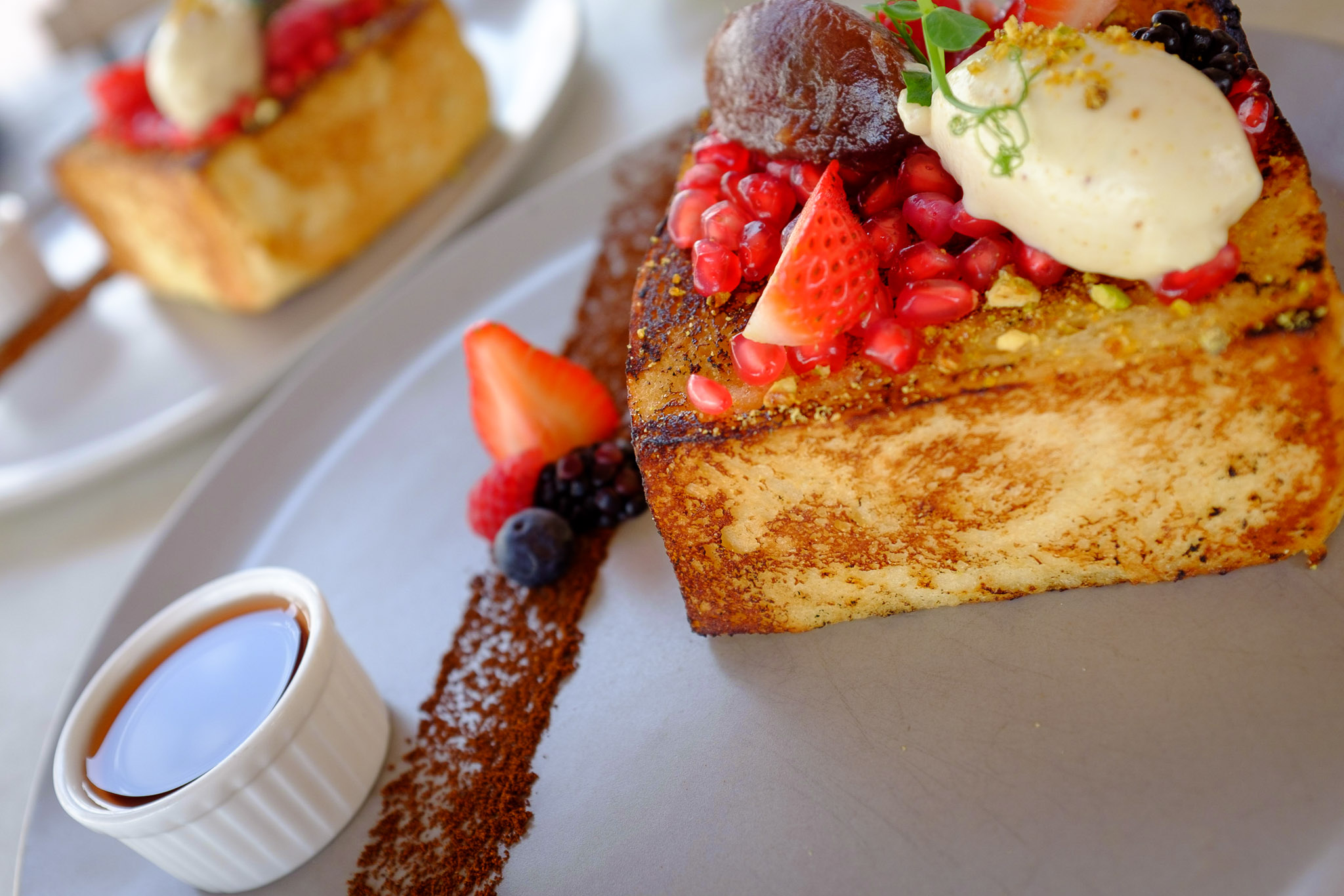 I had one more flight from Dubai before I would reach Rome. Another six hours in the air followed by a taxi ride to my apartment. Seeing Rome for the first time as we drove from the airport to the centre of the Old City was amazing. History was opening up before my eyes. I knew it was going to be a special time.

After a good nights sleep I was up and exploring. The reason for my visit was to take part in Valerie Jardin’s “Rome through your lens” workshop. In the interests of full disclosure, Valerie is a dear friend of mine, but that wouldn’t stop me from telling things how they are. Valerie would expect no less and I certainly wouldn’t do anyone the disservice of saying things that weren’t true. So, with that out of the way I’m going to say up front this workshop was simply wonderful. I got to meet new friends as well as catch up with Valerie. It was a week of pure photographic bliss. A time to ‘get in the zone’ photographically and explore the city with like minded people. Before the workshop began, I had a day and a half to explore by myself. Valerie had already arrived, together with special guest and fellow Fujifilm X Photographer Karen Hutton. I met up with Valerie and Karen on Saturday morning and we explored a little together both before and after lunch. It was great seeing Valerie again and a pleasure to meet Karen. 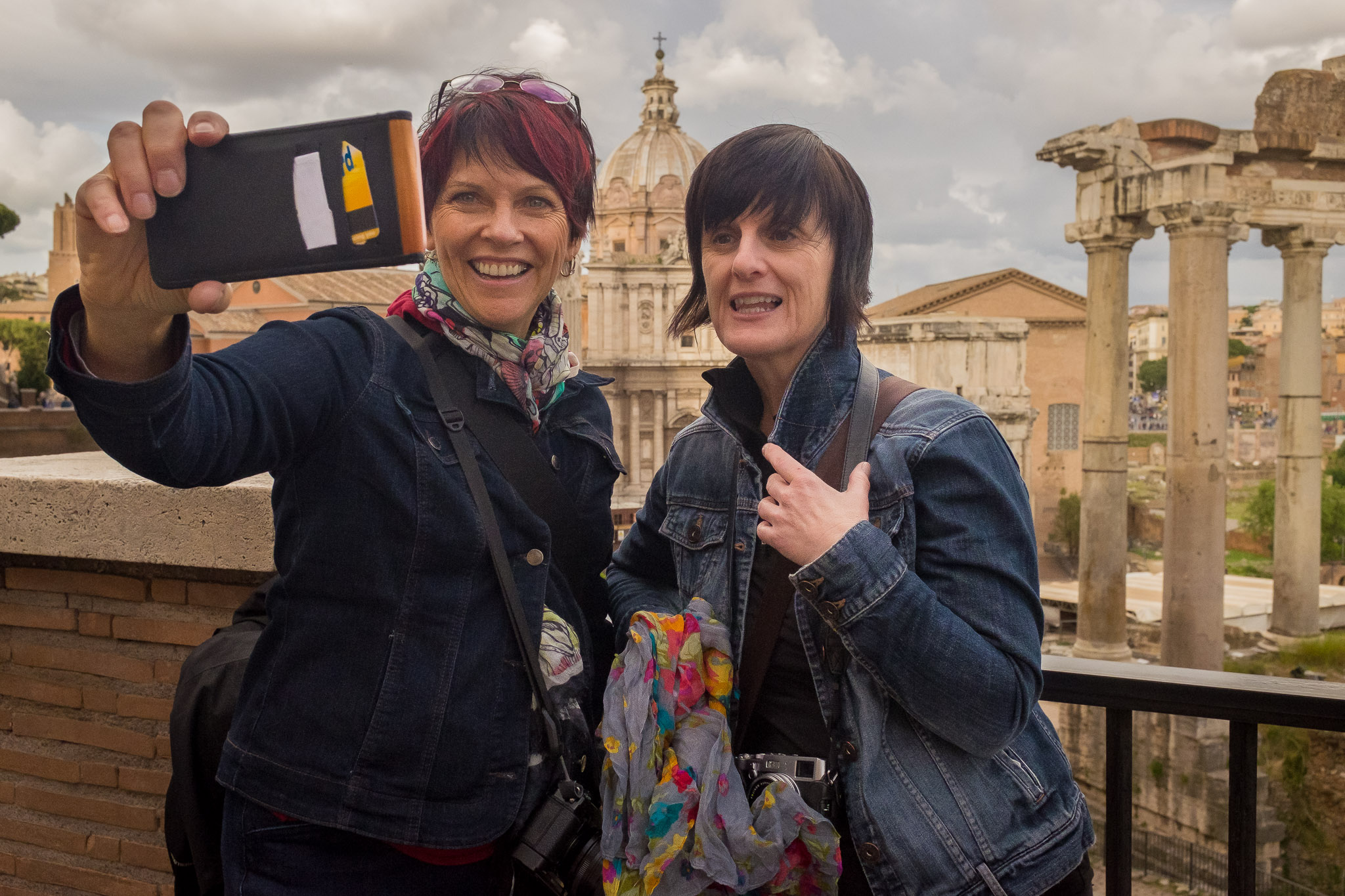 The workshop kicked off on Sunday afternoon with a presentation by Valerie and then a photowalk around the Jewish Ghetto area. I’m not particularly comfortable with the term Ghetto; although it’s original meaning is debated it’s generally believed to have simply been the terminology for a small enclave of ethnically similar migrants in a city; perhaps from the Italian word “borghetto” which means “a small section of town”. Jewish Ghettos became well established in many European cities, including Rome, during the second world war. 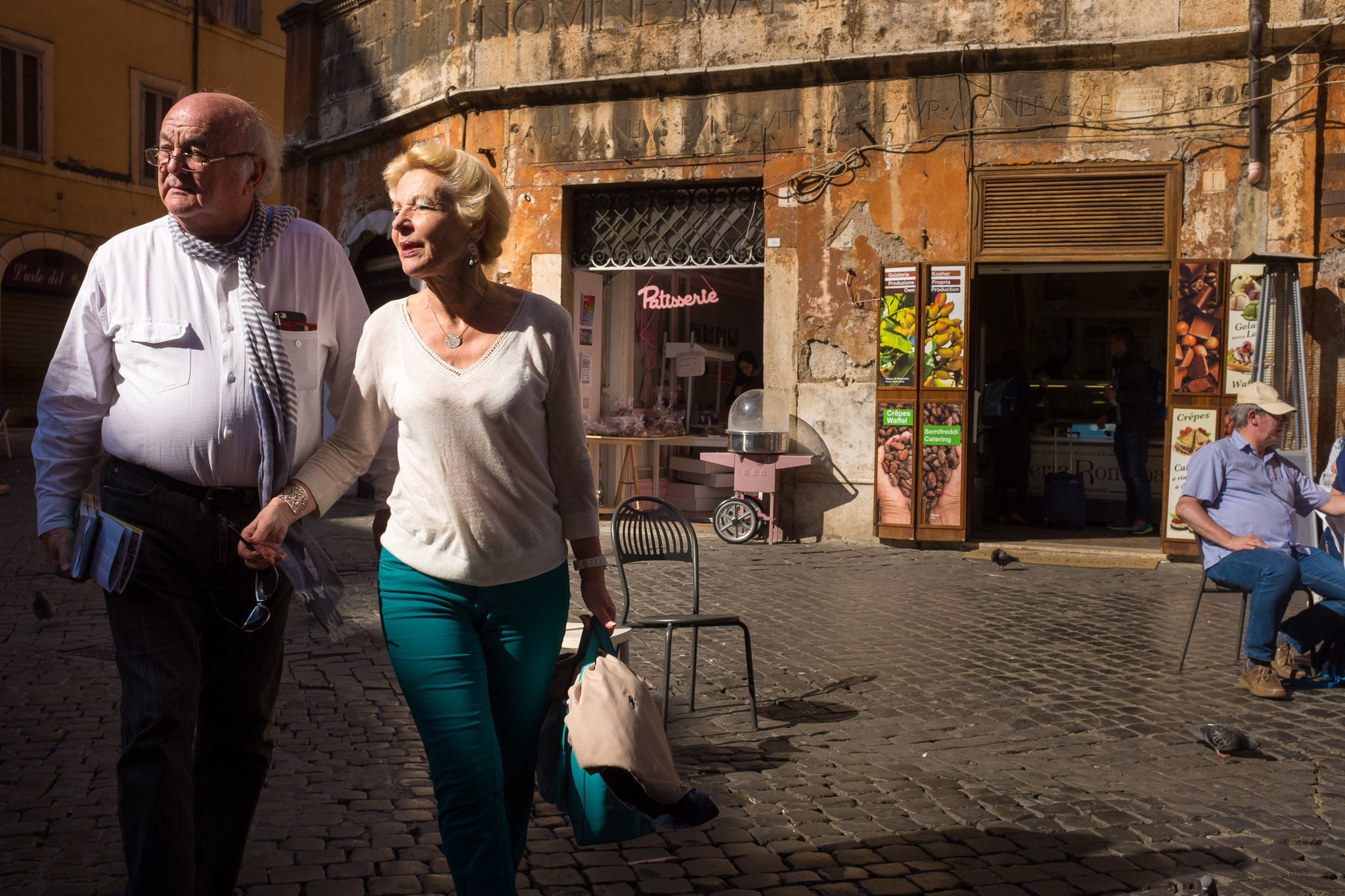 After the photowalk it was time to head back to our accommodation to freshen up before we all had dinner together and got to know one another a little better. A perfect end to a wonderful day… good friends, good food and good wine!

During the following week it was great to see friendships born and blossom. Every person that was there, was there for the same reason. We all wanted to learn… and learn we did. You can’t help but come away enriched when you take part in a good workshop. I don’t think it matters what the subject matter is, if you’re there because you’re passionate about the subject and you have a good workshop leader then you’re in for a treat. Workshops really are a great way to experience new locations while developing friendships and learning new skills. I’ve been on four workshops run by Valerie Jardin and I always come away enthused and enlightened. It’s fair to say I wouldn’t keep going back if that wasn’t the case!

The next six days were spent exploring various areas of Rome… Trastevere, more of the Jewish Ghetto, numerous piazzas and of course some of the main tourist attractions like Castel Sant’ Angelo, the Colosseum and the Pantheon. We wandered the cobbled streets and captured life as it happened, learning to see light and what was going on around us. Valerie has a wonderful way of imparting her knowledge; you learn without realising she’s teaching. It’s like talking with a friend as you meander the narrow streets discussing photography and techniques. You can’t help but learn. No matter how good you are, or how good you think you are, there’s always something new to learn; or at least there should be! 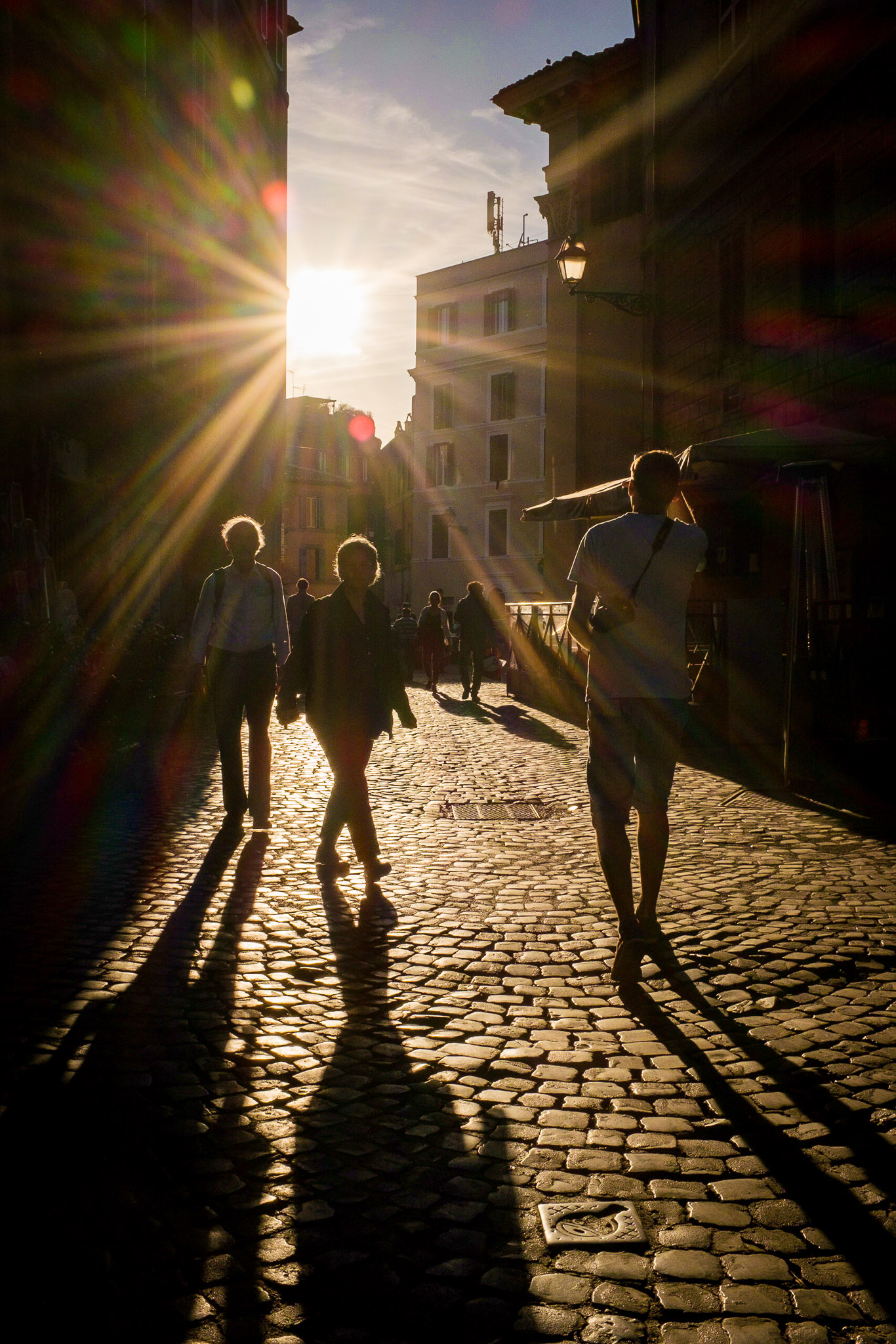 As the sun sets the shadows get longer in Trastevere, Rome

You need to participate in workshops, not just turn up. You need to be actively engaged and your mind needs to be open to new and exciting ideas. If you’re open to learning, then that’s what will happen. If you go there with the wrong attitude, well then you’re not participating and you probably won’t learn much. Go with the right attitude and you’ll come away feeling better about your photography and eager to try new techniques that you learned along the way. Don’t be afraid to listen and don’t be afraid to experiment. Workshops are great learning environments, providing you let them be. This workshop was no exception!

So… Roma! What did I like about the city? I spent all my time in the old city and thoroughly enjoyed it. The city is gritty, yet vibrant. You can’t help but notice a lot of graffiti just about everywhere you go, but it adds to the charm. The old city is a mix of ancient buildings that house well established business as well as new and exciting business ventures. There’s a café within easy reach, no matter which direction you walk. There are restaurants, cafés and pizzerias everywhere you look. And there are people. Lot’s of people. People of all shapes and sizes; many different ethnicities; rich and poor; there are homeless people and beggars; people hawking their trinkets. People are moving around the streets of Rome almost 24 hours a day. That’s what makes Rome what it is. It’s a melting pot of cultures; of affluence and poverty. It’s all of those things and it’s enticing. You can’t help but fall in love with all that is Roma. It’s a wonderful city; one that I hope to visit again… and again.

If you don’t have anyone to travel with and you’re a little shy about travelling to a far away city by yourself, then why not compromise… travel alone and take part in a photography workshop or retreat such as those taught by Valerie and Karen. You get the best of both worlds. You’ll travel alone, but spend your time with people who are there for all the same reasons. You’ll most likely make lifelong friends along the way!