Sometimes you get caught 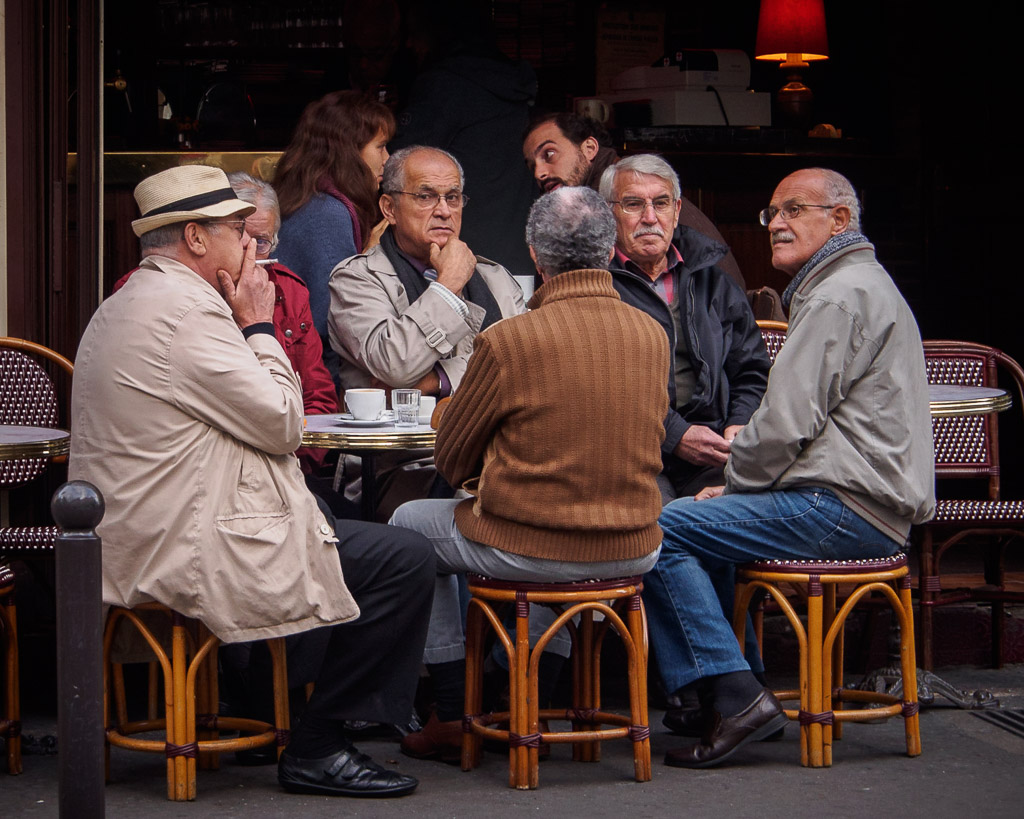 Sometimes you get caught. Making candid street portraits is fun and sometimes, well, your subject sees you. Nothing you can do about it… caught in the act!

That doesn’t mean there’s a problem though. You haven’t done anything wrong, so there’s nothing to worry about.

What can you do when you get caught making candid street portraits? Smile, acknowledge your subject and move on. Or you could engage them and have a conversation. Talk to them about why you were making a photograph of them in the first place… you’ll be amazed how many people feel flattered that you found them interesting enough to raise your camera. You could even take the opportunity to make a posed street portrait. 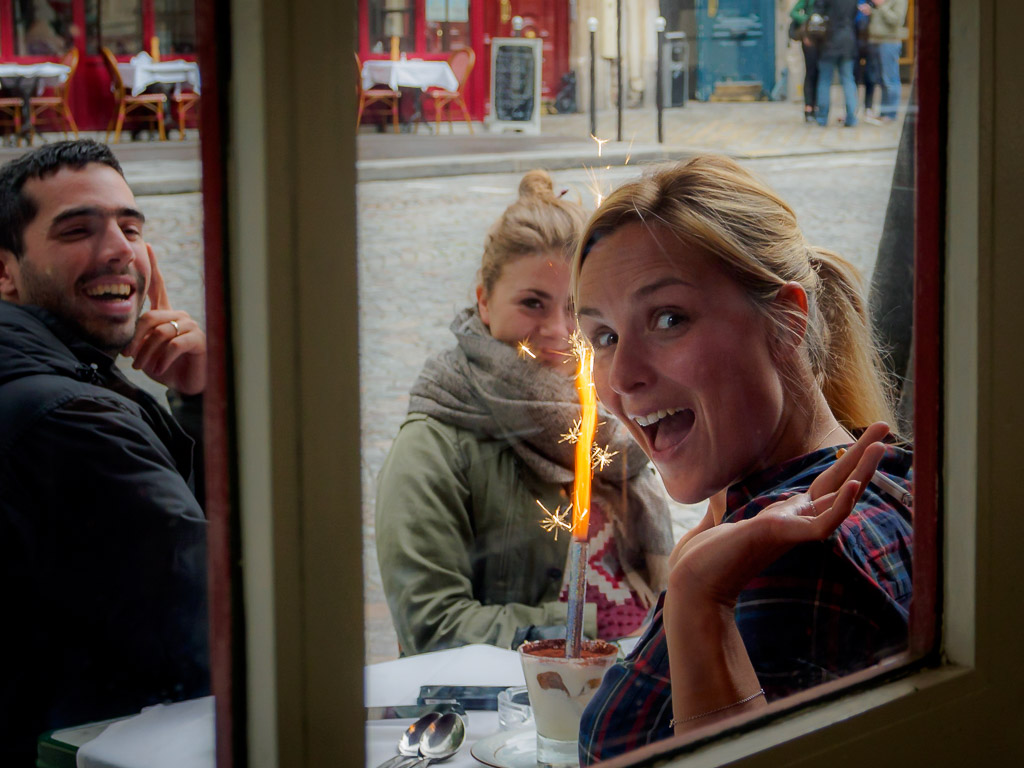 This image was made in Paris. While sitting at an inside table of a small restaurant I looked outside and saw a small group of people who were obviously celebrating a birthday. As they started to sing, I grabbed my camera and framed my shot. Someone saw me and pointed me out to the ‘birthday girl’ who then turned around and started laughing and waving. I made my photograph and waved back. They were still at their outside table when I left, so I went over to them and introduced myself. We chatted for a few minutes and then I moved on. Everyone was happy and enjoyed the moment.

The next image is also from Paris. While making some panning photographs, this cyclist saw what I was doing and began smiling and waving. He was more than happy to have his photograph taken and seemed to be really enjoying the moment. There was no pre-planning with him. It was a purely fortuitous shot. 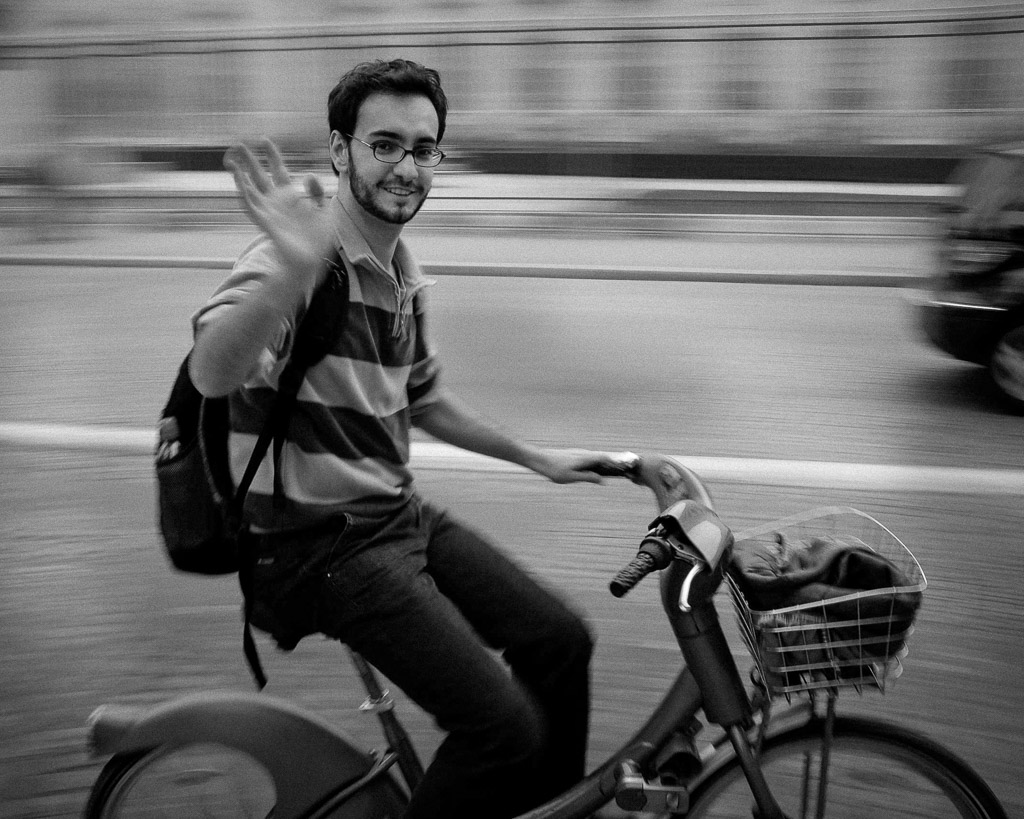 This third image was made in Vienna, Austria. The gentleman riding the bicycle looked at me as I made the shot and seemed a little perplexed. Maybe he was annoyed, maybe not. I’ll never know because he never stopped or said anything to me. He just looked at me, maybe wondering what I was doing. If he didn’t like having his photograph made he never made it known. There certainly wasn’t any confrontation. 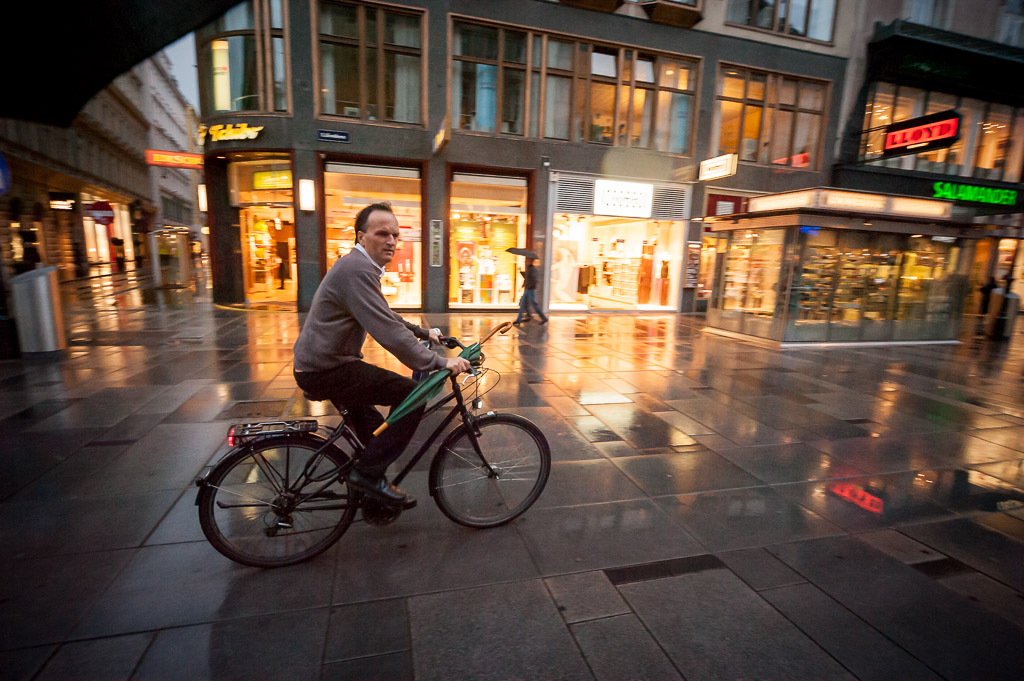 But what happens if someone does object? What can you do in those situations? Well, it all depends really. Generally, if someone is in a public place then there is nothing illegal about photographing them. As my friend Valerie Jardin says though, there’s no point in photographing someone that doesn’t want to be photographed. If you make an image of someone who sees you and gets mad, what’s the point in keeping the image? For me, all the image would do is bring back negative feelings, so I just delete them… whether I’m asked to or not.

Have I been approached by someone that didn’t want their photograph taken? Sure… a handful of times. There was never any real confrontation. I’ve been asked why I took their photograph. I’ve had people that were happy and even flattered after I explained and I’ve also had a few people ask me to delete the image. Done! No problems. I’m not interested in keeping the image if they don’t want me to have it anyway.

Here’s a few more where I was “caught”… 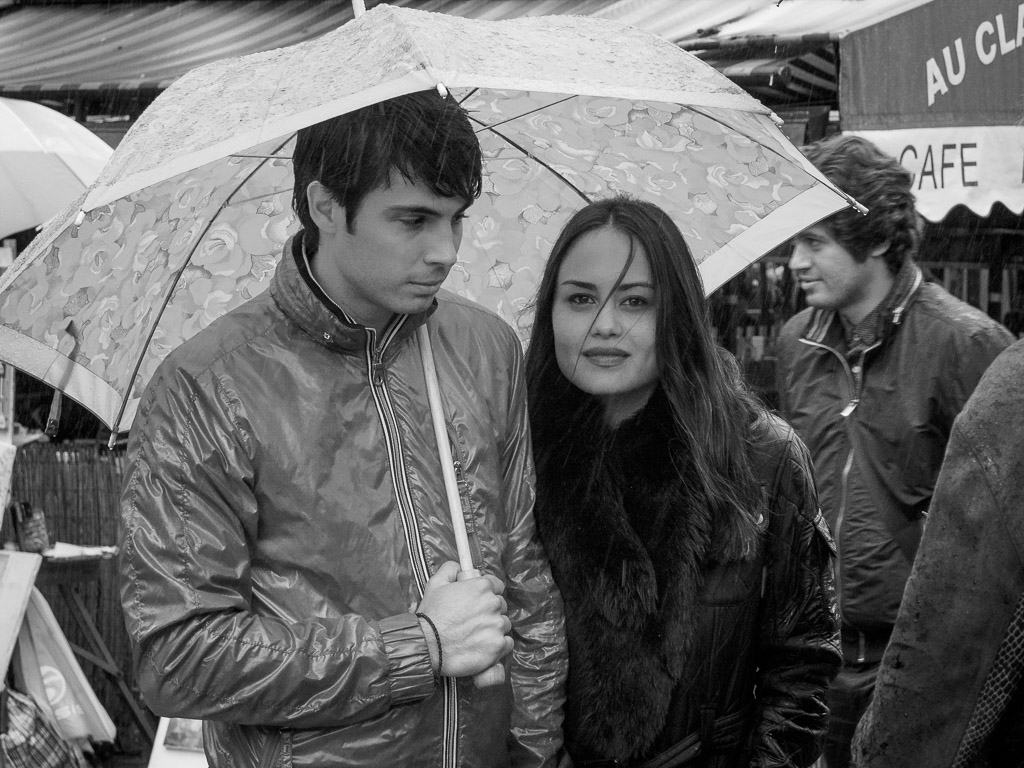 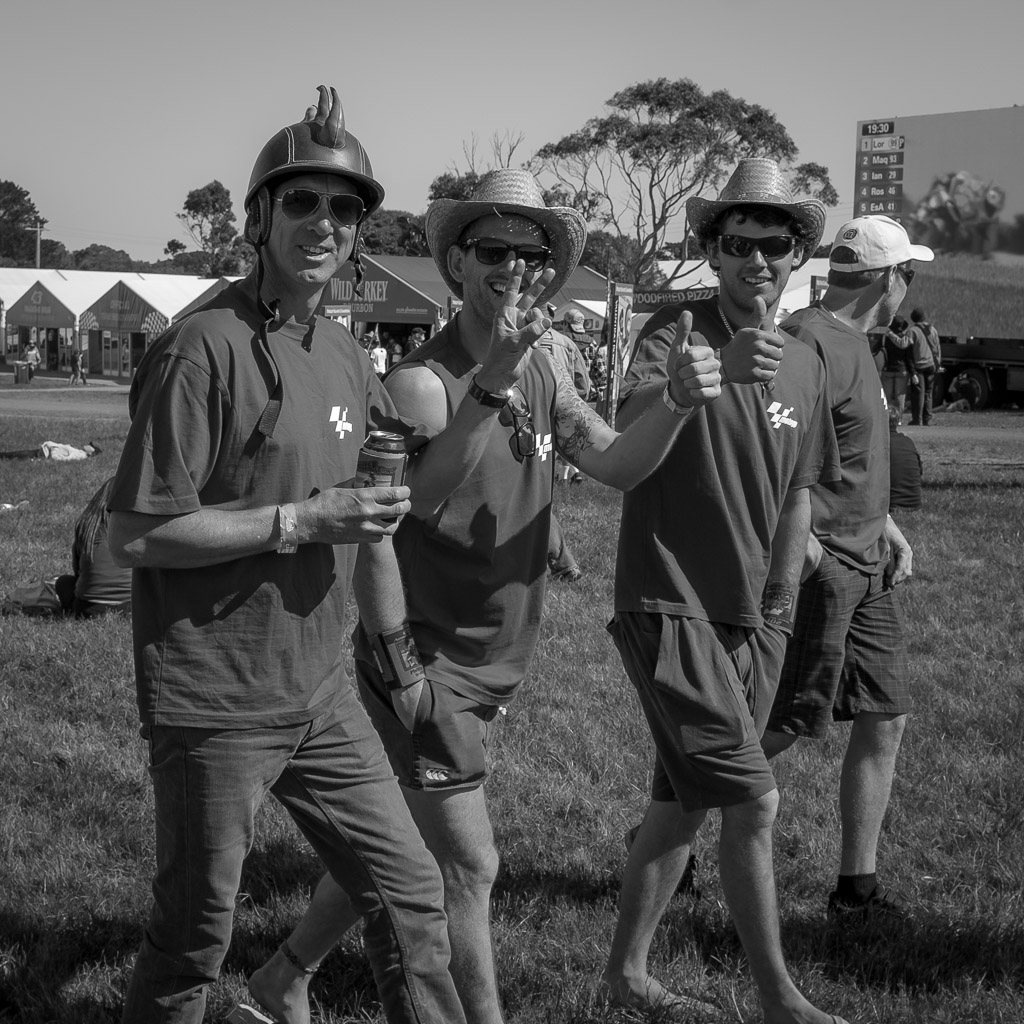 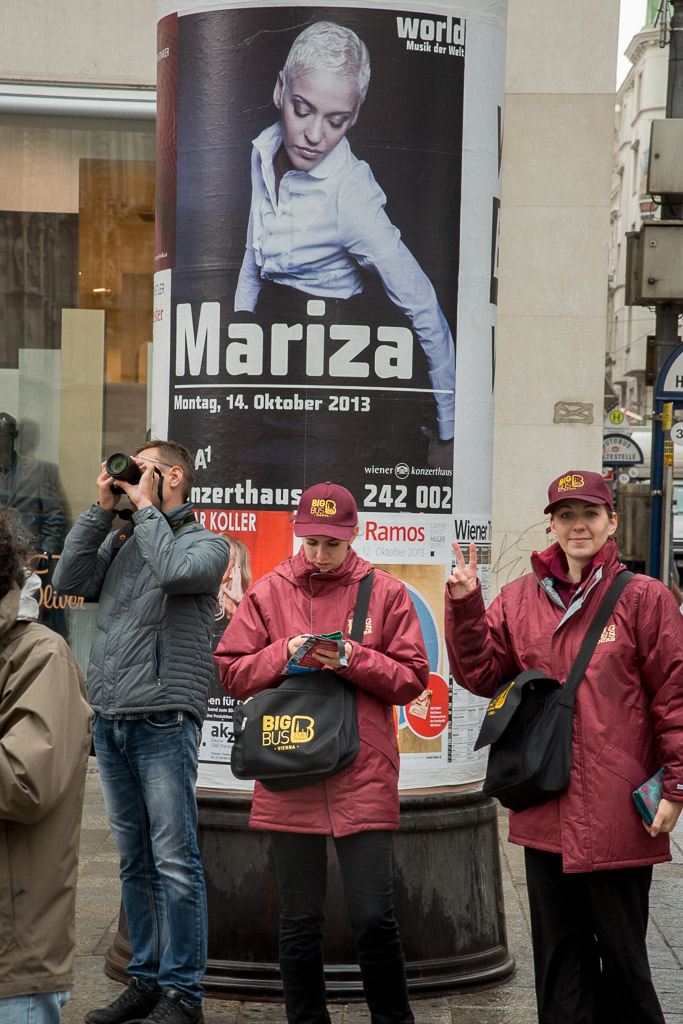 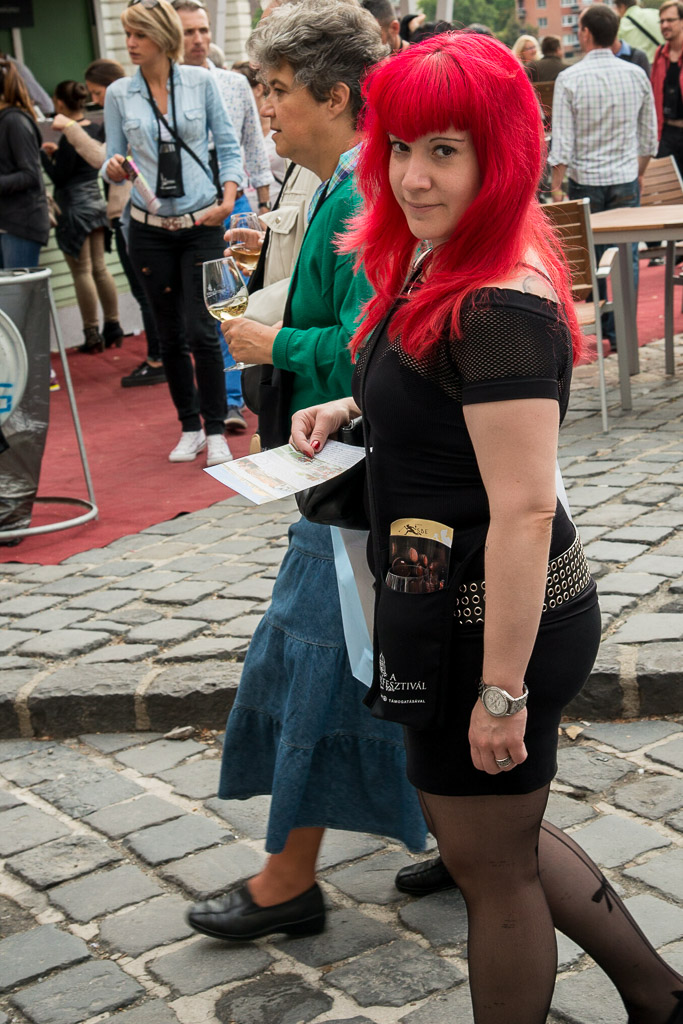 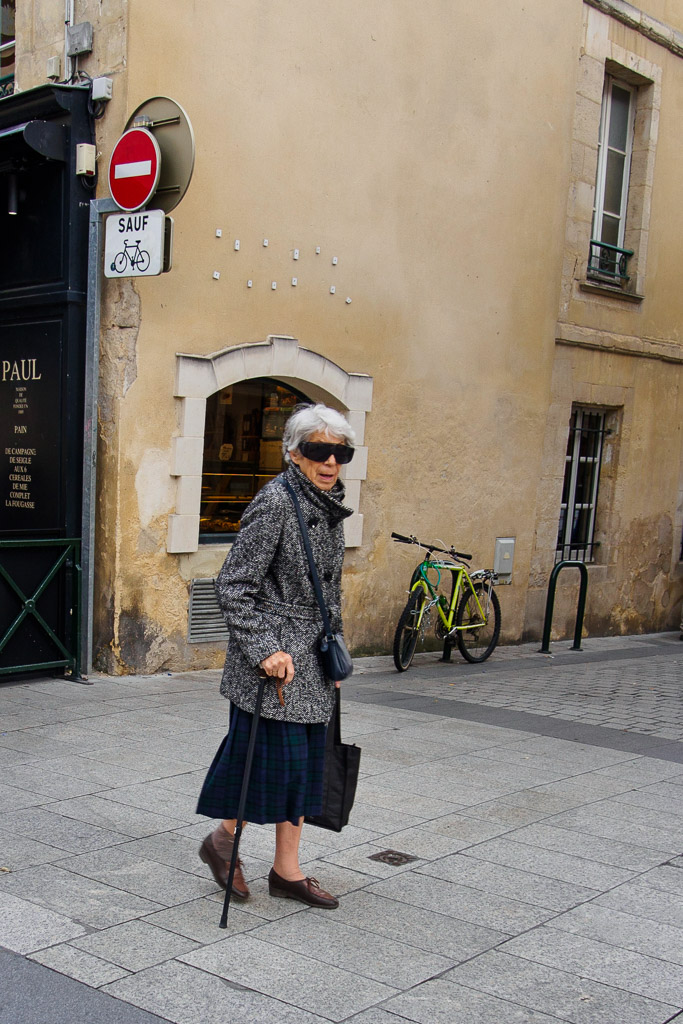 Remember – you’re not doing anything wrong. There is nothing wrong with making photographs of other people in public spaces. Having said that, always be mindful of other people’s feelings and wishes. Photography is enjoyable and should stay that way. There’s no point in anyone getting angry over photographs!