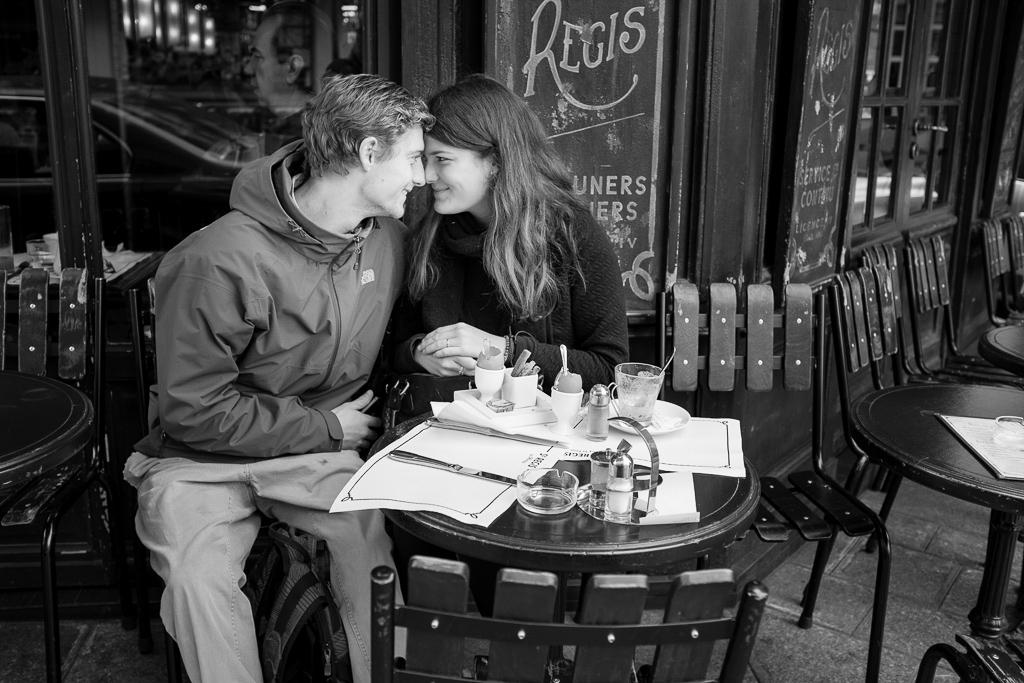 When you do include people in your image, the question becomes “do I ask them first, or do I just make a photograph without asking for permission?” The answer to that question is – “it depends.” Why are you taking the image? What is your intent? Do you want to make a candid photograph that shows people in their natural environment, behaving as they normally do, or do you want to make a portrait of them? Sometimes it makes sense to make the photograph without asking and other times it makes more sense to interact with your subject and ask permission.

When you do decide to ask permission, you have an opportunity to take control of the situation and make the best portrait you possibly can. That doesn’t mean you need to set up a mini studio with lights and reflectors, but it does mean you should think about your surroundings and use them to make a pleasing image. Perhaps moving your subject a metre or so to the left or right; turning them around so the sun is at a better angle; or maybe even crossing to the other side of the street to get a better background. If they’ve given you permission to make their portrait, take advantage of it. Not everyone is going to be happy about crossing the street, so that’s something you need to gauge on an individual basis, but it is something to bear in mind.

The photograph at the top of this post was made in Paris. I was with a group of other photographers, taking part in a workshop. We were stopped as a group and talking about where we were going to go when I saw this young couple just finishing a late breakfast. It was obvious they were smitten with each other and I had to make their portrait. As I was watching them, I sensed they were about to leave, so I broke away from the group and went over to them. After making sure they spoke English I simply told them they were a beautiful young couple and asked if I could make their portrait. They were happy to pose for me, so rather than have them just look at the camera I asked them to lean in towards each other, touch their foreheads together and look into each other’s eyes. You can see the love and happiness in their faces and I think it makes a much better image than if they were just looking straight at me. By posing them, I also created a heart shape with the tops of their heads, which adds to their story.

The next two images were taken in the Melbourne suburb of St Kilda. 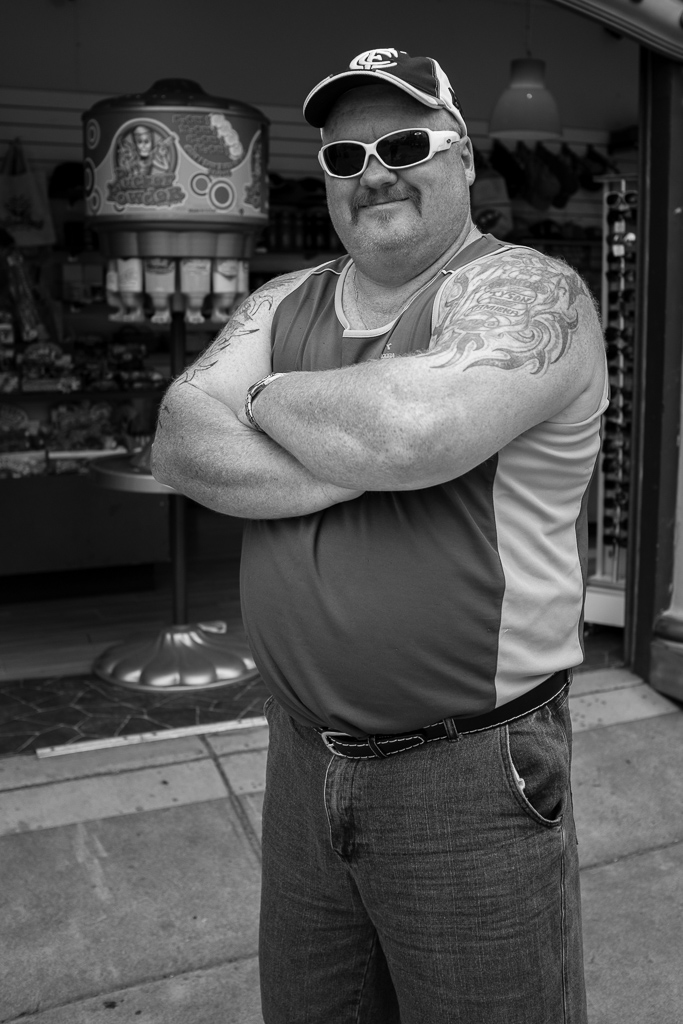 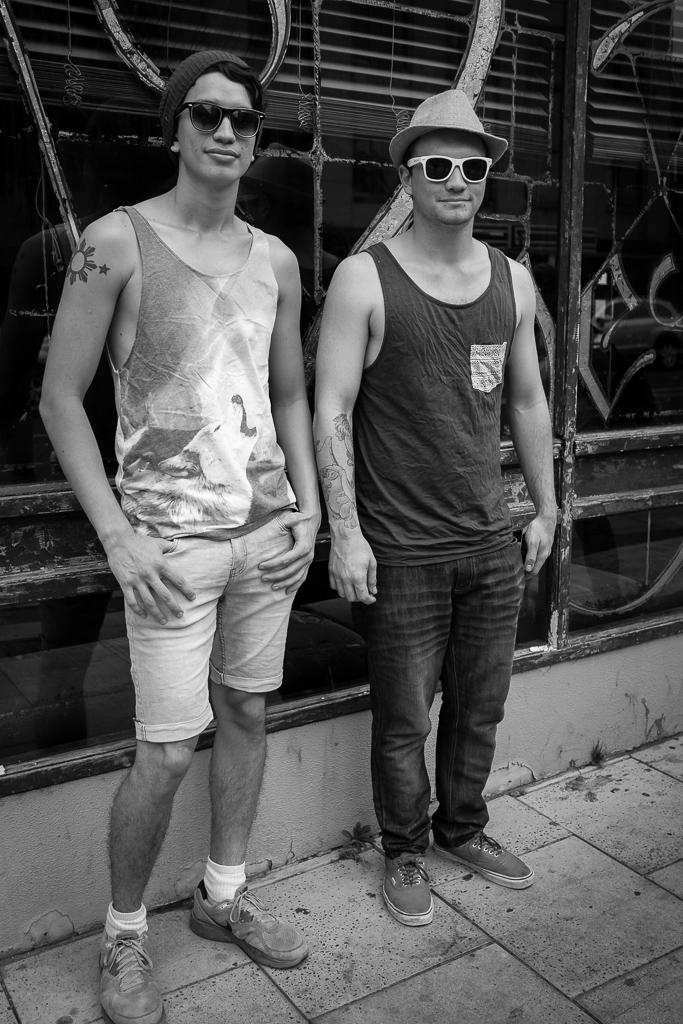 These two guys were walking along the footpath outside of Luna Park. A quick conversation resulted in this portrait of them

The first photograph was taken inside Luna Park, an amusement park located near the beach front. The park is popular with families, especially on weekends. Scotty was standing outside a confectionary shop waiting for his wife and daughters. I approached him and introduced myself and told him I thought he would make a great subject for a photograph. He was a little reluctant at first, so I gave him my business card and a quick explanation about street photography, then thanked him for his time. Once he knew why I wanted to make his portrait he was happy to oblige, so I got him to turn slightly and posed him with his arms crossed to highlight his tattoos. We ended up chatting for a few minutes until his family returned and then Scotty asked me to make a family portrait for them, which I happily did.

The second image is of a couple of young guys strutting along the footpath outside of the park. I stopped them and got them to pose for me, although they were a little self-conscious. They were in a hurry so they moved on as soon as I had made my photograph and given them my business card. 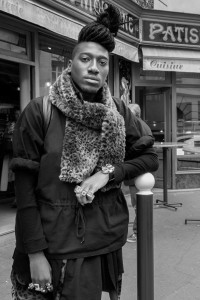 After agreeing to be photographed, I moved this guy along the footpath and posed him leaning on the post, with a Parisienne patisserie in the background

The last three images were made in Paris and Melbourne. The image on the left was in Paris in October last year. I saw this guy walking along the footpath towards me. He had a bit of an entourage with him and was obviously the leader of his group. I made a beeline towards him and after a quick “bonjour!”, I checked that he spoke English before telling him how great he looked. I asked if I could make his portrait, which he agreed to. I asked him to move about three metres along the footpath so I could get him to lean on the post. I also wanted to have a glimpse of the Parisienne patisseries in the background to add a sense of place. I made his portrait, gave him my business card and thanked him before he headed off along the footpath again.

The last two images were both made in the laneway’s of Melbourne. Hannah was standing waiting for someone, but the direct sunlight was very harsh and I knew it wouldn’t make a good image. There was just too much contrast, so I asked her to stand in a recess in the wall, which was completely shaded. I then got her to look down slightly and asked her to think about somewhere she’d really like to go one day. The sunlight reflecting off the ground she was standing on created a great fill light and her contemplative expression made for a more pleasing image. 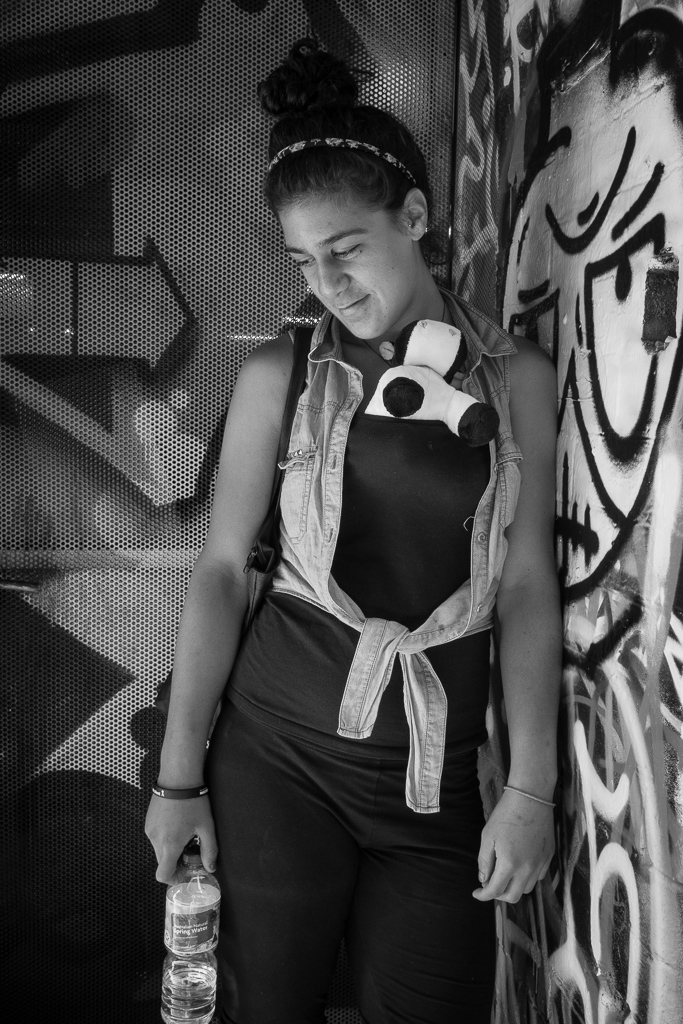 I moved Hannah into a recess in the wall to avoid harsh light, then posed her to take advantage of the reflective concrete floor 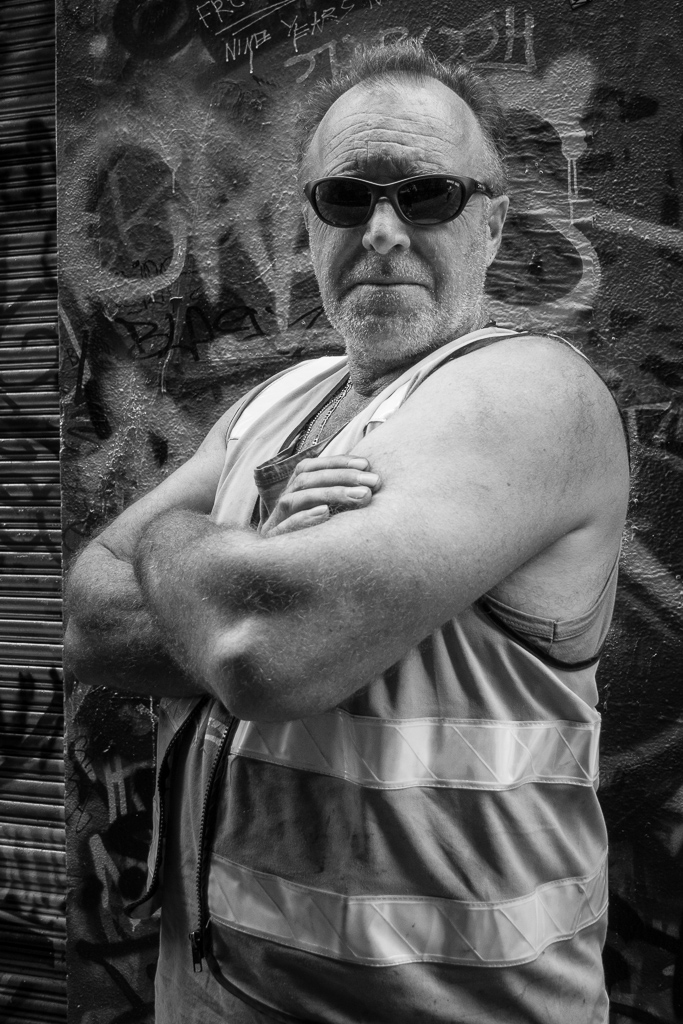 This road-worker was posed with the graffiti wall behind him, arms crossed and staring into the camera to add impact

Last there was the worker repairing the road in one of the lanes. He didn’t want to give his name, but he was happy to chat and pose for a portrait. By posing him against a backdrop of graffiti, crossing his arms and staring straight into the camera lens, I think you get a sense of who he is. He was great to chat with and really down to earth.

So, don’t be afraid to speak to people. You never know who you’ll meet, or what stories you’ll hear. Make conversations and then make portraits.